FROM REBEL HOMEMAKER BY DREW BARRYMORE

Make the cashew cream. Place the cashews in a small bowl and add just enough water to cover. Let sit, at least one hour at room temperature or up to two days, covered, in the refrigerator. Drain the cashews and rinse. Combine the cashews, warm water, Dijon mustard, apple cider vinegar, and miso paste in a blender. Blend until the mixture is very smooth and creamy with no grainy bits remaining, scraping down the sides of the bowl as necessary. Season with salt and pepper to taste. Cashew cream can keep, covered, in the refrigerator, for up to five days. Preheat oven to 400 degrees. Heat a medium skillet over medium-high heat. Add one tablespoon olive oil and swirl to coat. Add the onions, garlic, and sage and season with a half teaspoon each of salt and pepper. Sauté, stirring, until the onions are softened and begin to turn golden brown, about six minutes, reducing the heat as necessary to prevent burning. Remove the pan from the heat. Add the almond milk, Cashew Cream Dressing, thyme, and nutmeg. Stir until smooth and season to taste with more pepper. Lightly grease a broiler-safe, nine inch cake pan or casserole dish with the remaining two tablespoons olive oil. Working from the outside of the pan in, place one layer of squash in the pan, shingling the pieces in a circular fashion. Season with a half teaspoon of salt and a generous pinch of pepper. Pour a third of the cream sauce over the squash, spreading with a small spatula to make sure that all the pieces are covered, Repeat, alternating layers of squash and cream sauce, finishing with the cream sauce on top, three layers total of each. Transfer the prepared gratin to the oven. Bake for 40 to 45 minutes, rotating halfway through, until the squash is tender and golden on the edges and the cream sauce is set. Turn the broiler on high and broil, watching carefully to avoid burning. Broil until the top of the gratin is browned and crisp, 1 to 2 minutes, Remove from the oven and serve. 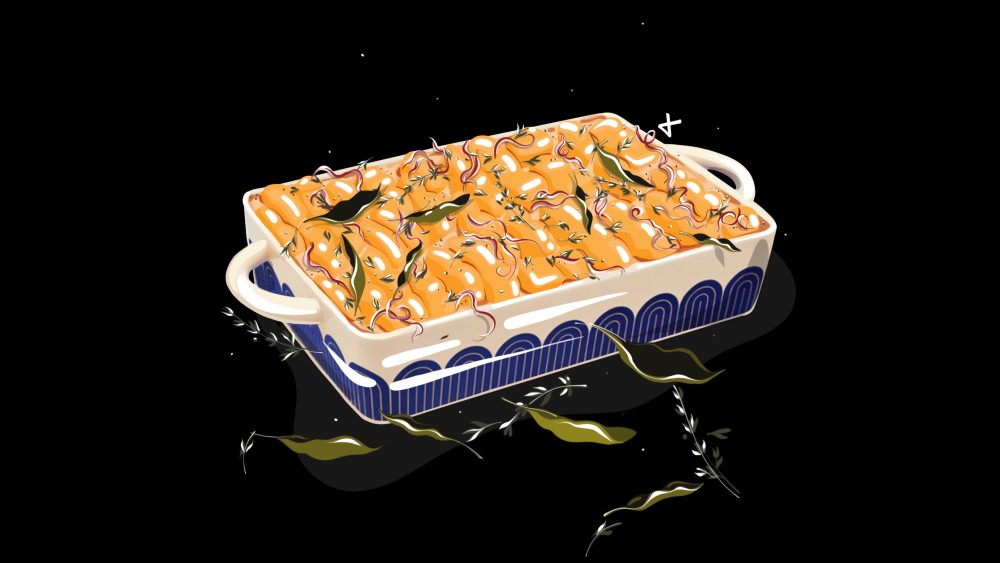