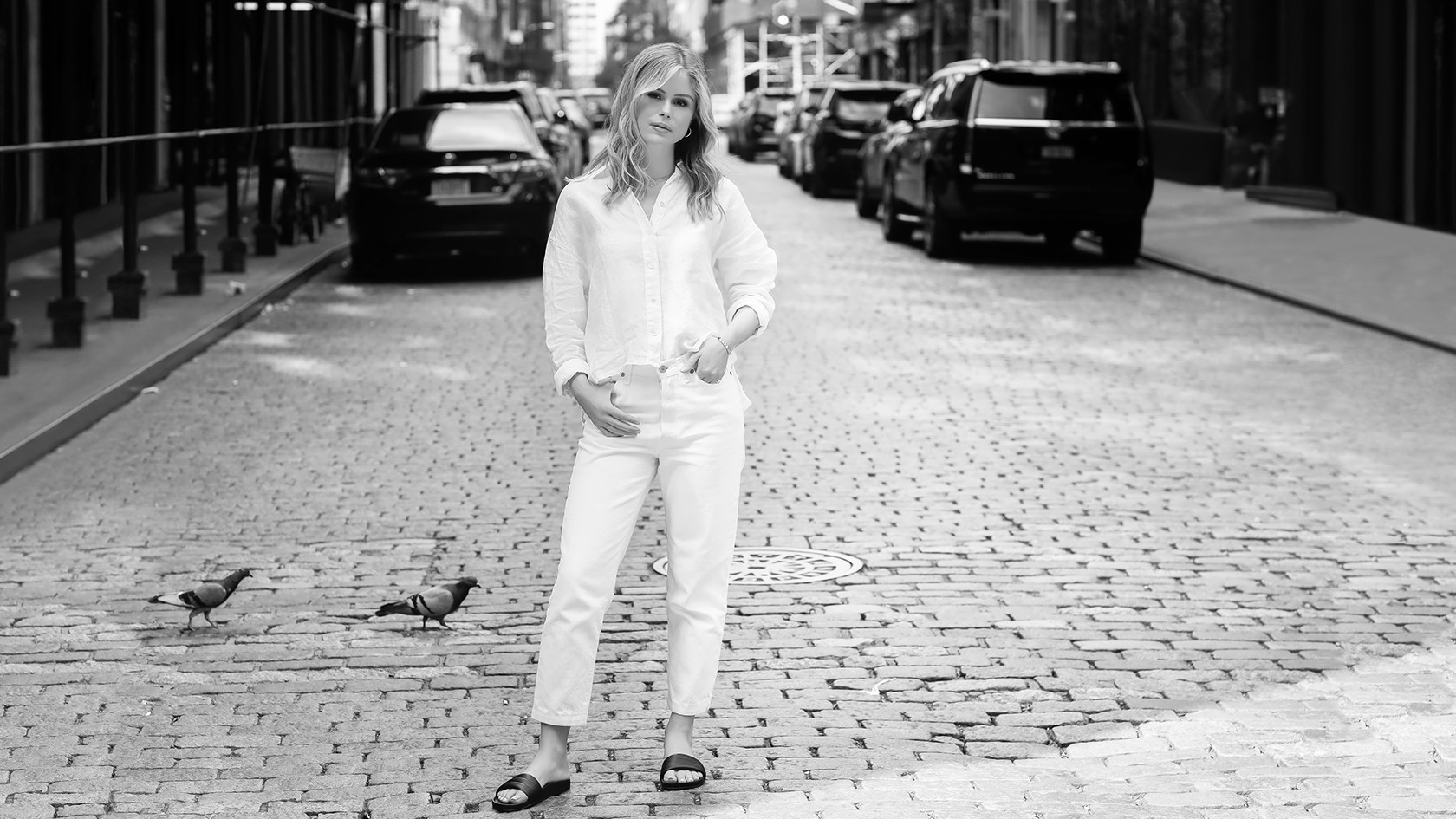 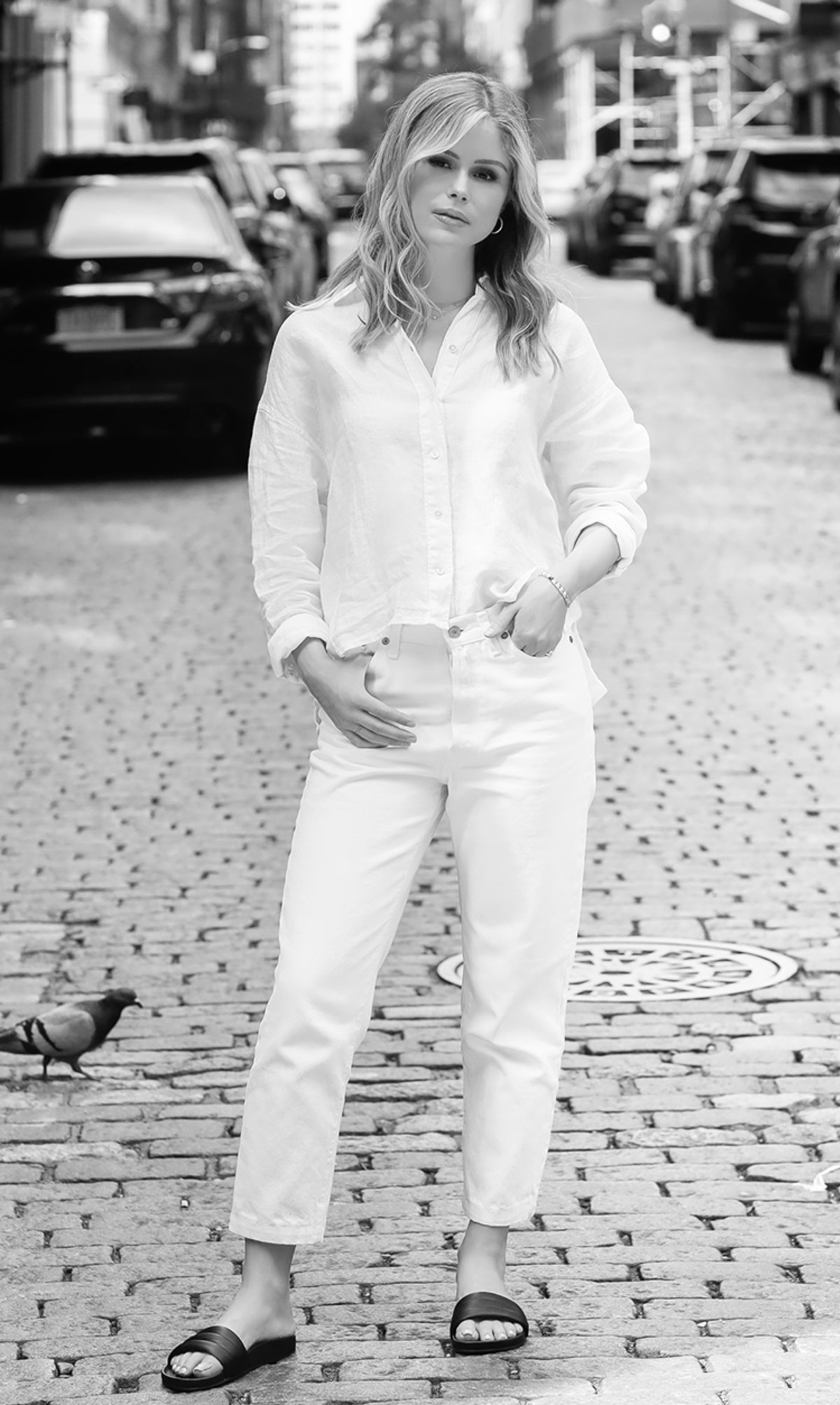 In the nine years since actor Erin Moriarty first appeared on screen, she's racked up television and film projects that feature a slew of major male stars including Ben Stiller, Vince Vaughn, Jonah Hill, Woody Harrelson, Viggo Mortensen, Mel Gibson, William H. Macy, and, most recently, Chace Crawford. This summer, she appears in Amazon's new series The Boys, currently streaming, and co-produced by Seth Rogan. The Boys takes on the topic of the powerless versus the powerful, where superheroes are celebrities who abuse their gifts and where, as Moriarty describes, "the women at the end of the day are the strongest characters, and my character deals with crazy circumstances pertaining to the Me Too movement". Moriarty grew up in two distinct worlds in New York City, giving her a savvy sophistication that has made her adept at understanding and developing characters. A child of divorced parents, she split her days living with her academic mother and family on New York's Upper East Side, and her creative, blues musician father downtown, in Alphabet City. From a very young age, Moriarty was watching a wide range of films and performances with her father, a regular practice that allowed the two to "bond". Consequently, the acting bug bit. On a sunny day in our shared hometown of the Big Apple, we went deep on fashion, discussed dream directors, and set the record straight on a certain stigma.

What is your version of a t shirt and jeans? I like that flats, a t-shirt, and jeans are now considered acceptable to wear all the time! I've always gravitated towards that look. I'm from New York City and I find that I want to be comfortable all the time because I'm walking around everywhere. But I love to put my own spin on it. For example, today is a summer day in New York and I'm wearing a classic white linen button down shirt and white denim jeans. I like linen because it breathes, and I love that wearing all white is becoming a trend again. My favorite jeans are Levi's. White Levi's or standard blue denim Levi's; vintage Levi's. I got these at Reformation. I like to wear slides. The ones I'm wearing are by Beatrice Valenzuela. They're really simple and beautifully made. I can wear them during the day with jeans and a t-shirt, or a little dress at night. I much prefer to wear flats since I have to wear heels to events. I have a dog that's still really young, and I have to walk him so many times throughout the day, so I like things that take a second to put on but feel really cute. I wear gold jewelry, and a mix of the more delicate stuff. I wear a lot of Catbird. They make the most simple rings, including pinky rings. My spike bracelet is by one of my best friends in Los Angeles. Her line is MRE Jewelry, and I designed it with her. My diamond necklace was my great great grandmother's. It was originally a bracelet and a bangle, and it didn't fit me, so I converted it into a necklace. I have five piercings in one ear and three in the other, and usually they're filled with earrings but I was filming and I had to take them all out.

Where are you from in New York? My life was a total dichotomy. I grew up in a polished neighborhood on the Upper East Side with my mother [a business manager for an interior design company], and with my dad in Alphabet City. My mother and her family are very academic. And my dad is the creative type, he's a blues musician. My weekend routine with my dad was to walk across Tompkins Square Park to get bagels, and at that time, the neighborhood wasn't completely safe.

Do you have a dream project or dream co-star? I have dream directors that I'd love to work with. The Boys is a genre that I never expected to have so much fun working in. I would love to work on it for a while, and in my off time I'd love to be able to work on things that are the opposite in terms of subject matter and style. I'd like to do character-driven, indie films. I love the Safdie Brothers and I love Andrea Arnold. I like the types of indies that have you questioning whether you're watching real life or a film. I also have the pipeline dream of working with someone like Quentin Tarantino. I love his stylized work.

How do you get your best ideas? It's a combination. My own method might be considered by some teachers or people who work in the industry to be contradictory, but it's what works for me and I believe we all need to figure out what works for us. I very much draw from my personal life as well as from my imagination. I take the personal experiences that I've had that make me feel most connected to what the character is going through. I also like to study actors in shows and movies that really inspire me. I'll watch a tv show or a performance or a movie that will remind me of of my character. Or I think a performance is so brilliant that I get a little obsessive, watch it four times, and through osmosis, soak it all up. I'll do research, a lot of research, if it's necessary for the role. But it's very dependent on the role

What do you do when you are stuck? Honestly when I'm really really stuck I have a teacher who I work with. There's a stigma around admitting to working with a teacher, which I don't get. I'm fine talking about it because I feel you should use all the resources you can. I've worked with a teacher since I was fifteen who I really love, and he helps me gain extra perspective. I'll talk to the director, or show runner, or the actor I'm working with in a scene, and not totally rely on myself. I'll try to get outside perspectives on the role. I acknowledge that it's a collaborative effort. As much as it's me playing a character, someone else has written the character.

Are you afraid of anything? On a simple level, I'm desperately afraid of heights. Also, I think that I'm really afraid of playing roles that are the extreme polar opposite of myself. Which, by definition, is acting. I think I've gravitated towards roles that I have a deep connection with for a reason. The roles that are the the most different from me have been the most gratifying to play, and they're the ones I've been the most afraid of. I'd like to play those kinds of roles more. They're the most terrifying but the most fun, and I've proven to myself that I can play them.

What is your most amazing recent discovery? I got a dog four months ago. I'm not an impulsive person, but I got the dog pretty impulsively. I love animals and I've worked at animal organizations, but I travel a lot, so I thought I'd volunteer until I could adopt ten years from now--- until I saw him at a hair salon one day. I wanted him, so I adopted him. It's been such an amazing, healthy place to channel my love. Whether I bring my dog to work, or leave the house and come home to him, I have an unconditional source of love, which is great as someone who's young and yet to build a family. It's one of the best decisions I've ever made. I'm very much a homebody but I travel so much, so sometimes I find that unsettling. Having a dog allows me to carry my home everywhere with me. I've been looking after myself since I was seventeen and I've often been quite maternal with my friends. I've needed something more direct to channel that energy towards.