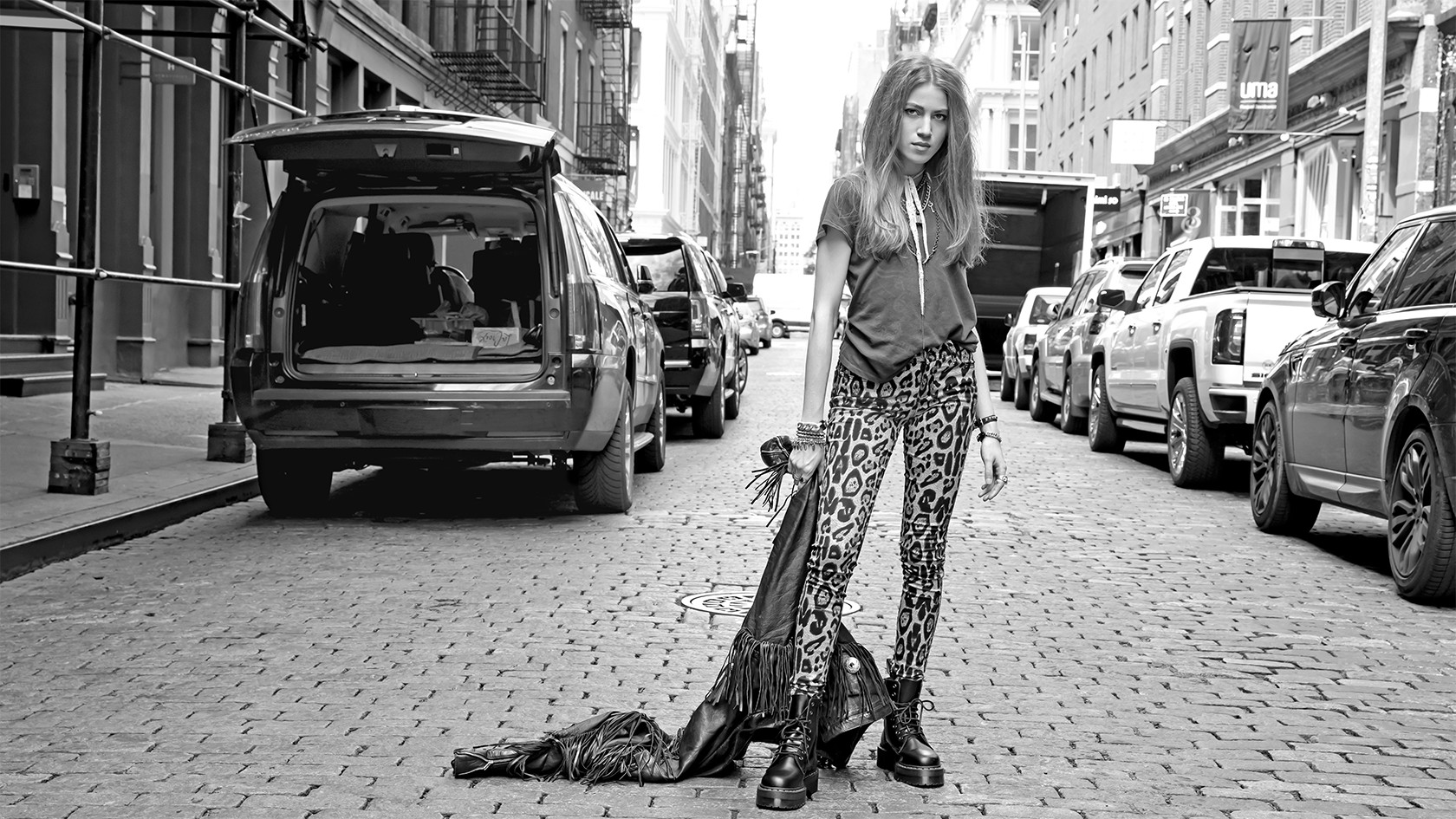 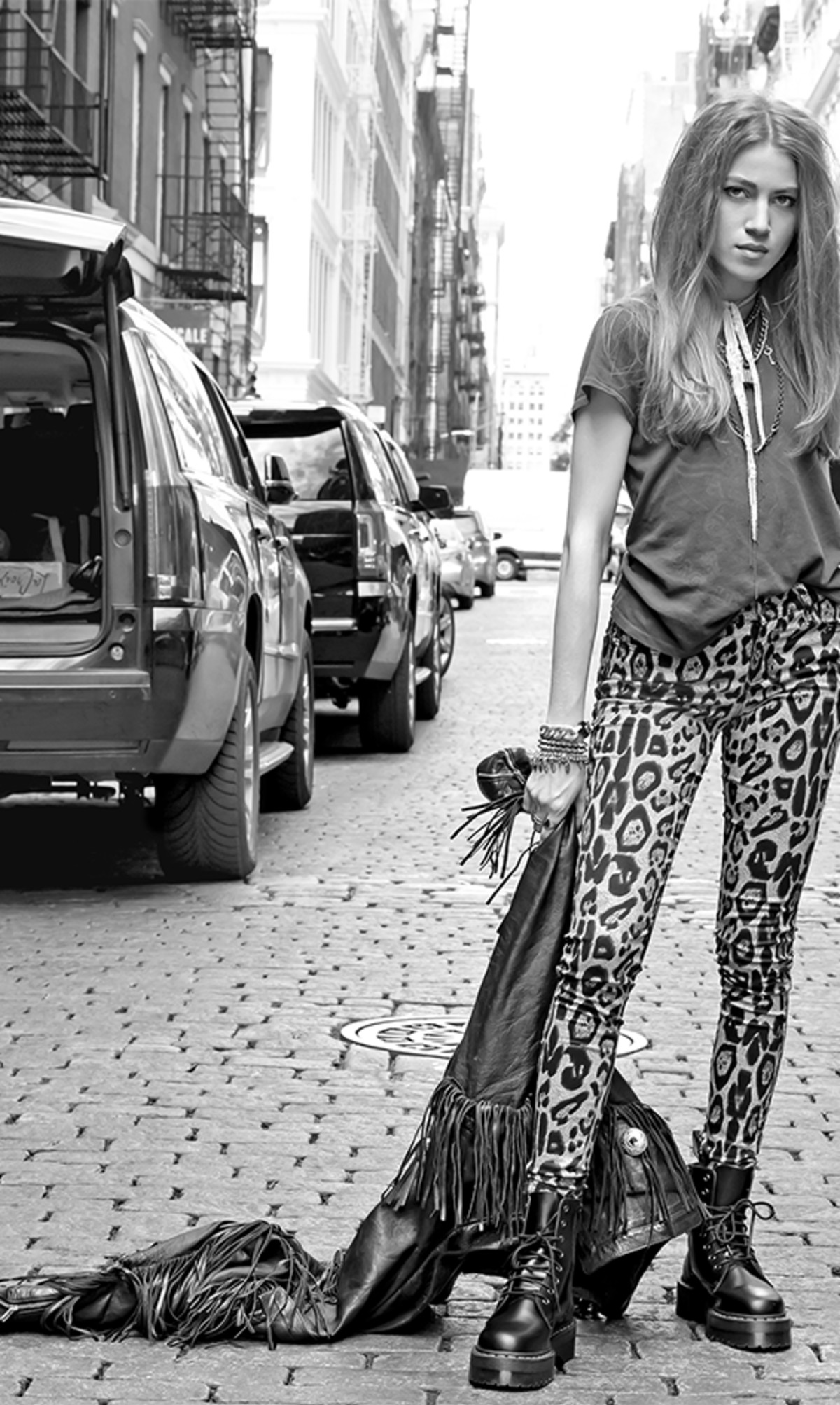 HER LIFE IS HER ART
ALEXA DARK

Alexa Dark is a singer-songwriter and guitarist living in Hell's Kitchen, in the heart of New York City. Dark was raised between Spain, Germany and London, and her songs intertwine cultural and personal narratives. With a repertoire inspired by her diverse upbringing and transient lifestyle, her music combines elements of classic blues with contemporary rock. The diversity in her background runs deep: her father is from Arkansas, her mother is from Barcelona, and she has Russian and Arabic blood running through her veins. Dark says that when she leaves the U.S., she is considered American while here in America, she's considered international. We talked to the multi-culti talent about how European music has influenced her, her first musical memories, her distinct style, and more.

What is your version of a t-shirt and jeans? I'm wearing a really old band tee of The Who, it was my moms. And I'm wearing leopard print jeans from Trash + Vaudeville, with docs. I usually wear printed, flare, or leather jeans. I always wear layered jewelry, and my skull ring is my thing. I love my chains too. I typically wear jewelry, and usually some sort of scarf. Scarves I've picked up here and there, skinny scarves.

How do you describe your music? It's a mix. I'm really inspired by blues rock, by classic rock, by contemporary stuff. So I would say it's alternative rock within those genres.

How did you come to know you had musical talent? My dad's family is very talented musically, but doesn't really do anything with it. My mom's family is not, but they do a lot of singing in the kitchen, that kind of thing. They're very into Spanish songwriters, and play them really loudly and sing along very terribly! That's how I developed my love of music and my love of the poetry of lyrics. I was raised around music always. But it wasn't until I met the guitar that I really knew.

Do you have a first memory of music? Being in my grandmother's kitchen in Barcelona, with all the windows open, and her singing along to Serrat, the Spanish songwriter. That's when it got me, and it remains with me, through all my moves within genres and instruments. That's where I say I got the heart of my music.

How do you get your best ideas? Usually when I'm traveling or experiencing a new place that I'm unfamiliar with. That's due to my upbringing. Being forced to see things through fresh eyes kills the mundane of the everyday, and that usually does it.

Where do you keep your ideas? Voice Memos on my phone. I have to go through and organize them every once in a while.

Who is your biggest musical inspiration? I'm inspired by some of the French songwriters, like Françoise Hardy. I bought her record for three pounds when I was in London, and it changed my life. And the Rolling Stones.

Do you have a dream collaborator? Stevie Nicks or Cher.

What do you do when you're stuck? I try to jam out on my guitar for a little bit without any expectations of coming up with something. I try to reconnect with the basic elements. Growing up I always wrote with my guitar in my room. Sometimes I need to kick everyone out and go back to my acoustic guitar that I've had forever.

Are you afraid of anything? Oh yeah. Bugs scare the living hell out of me. I'm a perfectionist in a way, so I have a fear of not making something that really shows who I am. I always try to approach my work by doing that to the best of my ability.

What is your most amazing recent discovery? I went into a really small gallery in Brooklyn a few weeks ago, I can't remember the name of it. I love discovering teeny tiny places in locations that I know so well, like New York.