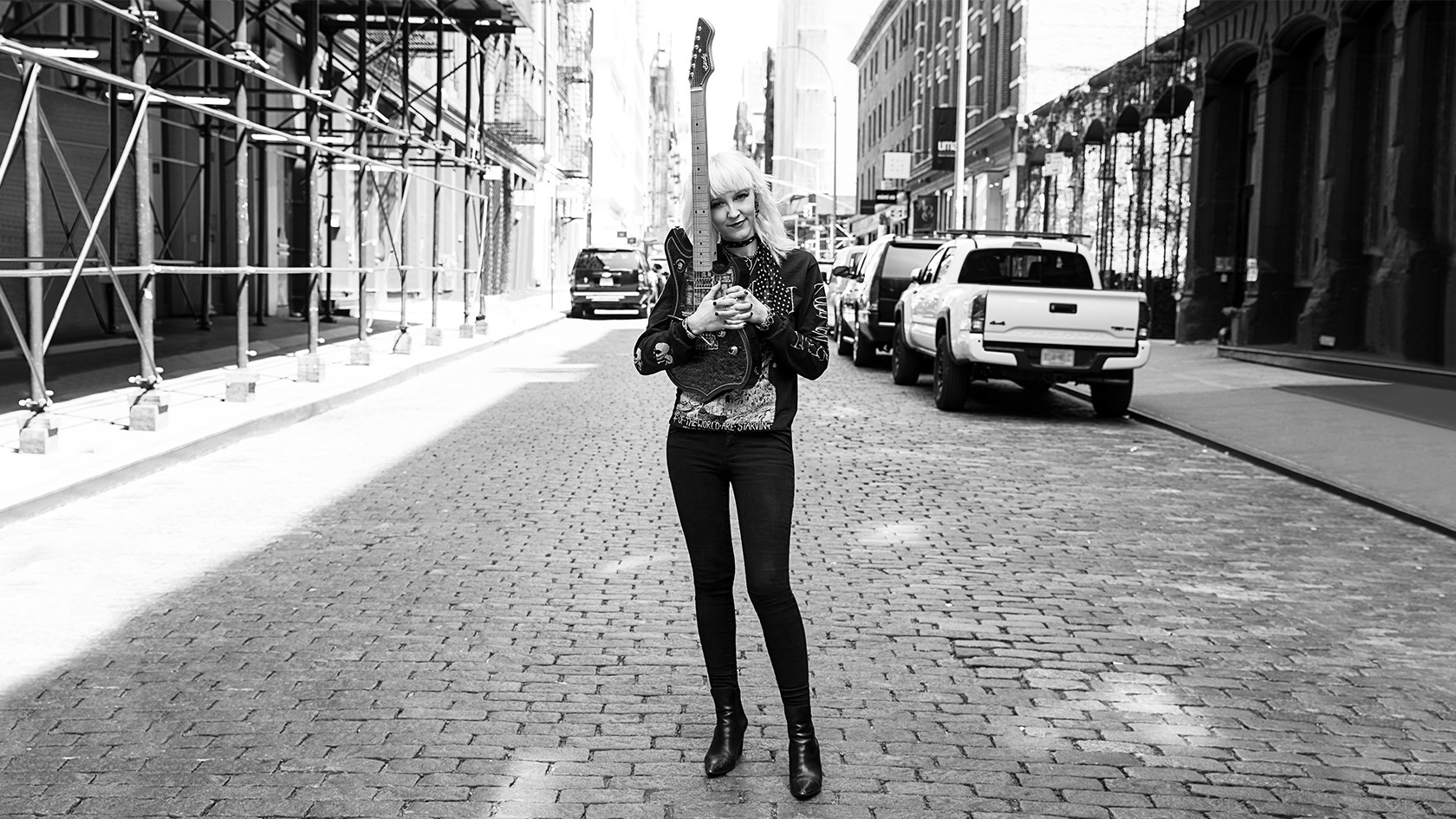 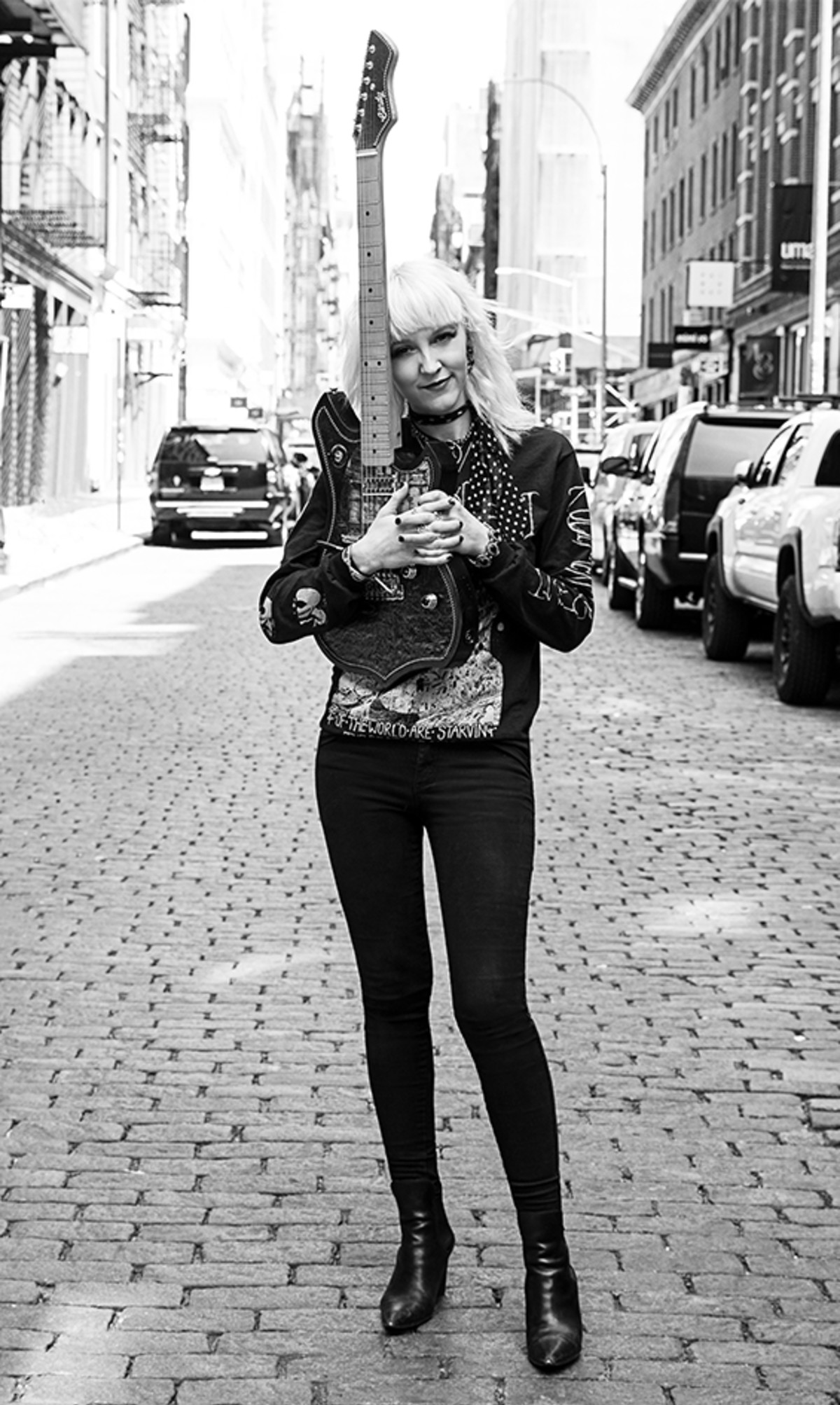 On New York's iconic Carmine Street, in the heart of Greenwich Village, you'll find 27 year old Cindy Hulej making custom guitars from scratch out of 200-year-old wood that has been reclaimed from famous New York City buildings. She applies unique customization on top of already customized designs, and works with materials such as leather, velvet, and feathers, and techniques such as hand painting and woodburning. Hulej has been building up her own brand of guitars for seven years now, out of Carmine Street Guitars and alongside Rick Kelly, both the subjects of a film of the same name, which appeared at four film festivals including the Toronto International Film Festival and South By Southwest. The film features a cast of prominent musicians and artists working with Hulej and Kelly, capturing five days in the life at the shop and a slice of the artist's life, showing resiliency in a fast-paced, tech-driven world. A longtime lover of all things DIY, Cindy also has a penchant for "things with a story", and grew up scouring garage sales with her grandparents. She studied music and art from a young age, no doubt encouraged by her family who are also artists: her father played guitar for forty years, and both he and his father were stone setters. We talked about how her stumbling into a church inspired one of her guitars, ideas sparked by unique objects, being in awe of one's own strength, and more.

What is your version of a t-shirt and jeans? I mostly wear a low cut button up or a band shirt with black jeans, 99 percent of the time, and some chelsea boots.

Who are some of your favorite musicians? Rowland S. Howard is at the top for me, Ozzy Osborne is one of my favorites. But my tastes are really all over the place. I grew up with oldies, and southern rock, and I listen to blues all day in the shop--so I really have a wide range. It kind of goes with the mood I'm in.

How did you start doing what you do? My father played for forty years. He was a guitarist. And I was always very DIY and hands-on. I'd go to garage sales with my grandparents. I've always loved things that have stories. My grandfather was a stone setter, his father was a stone setter. He actually built 7 World Trade. I grew up with guitar, and I had an artist or two in my family. From a young age, I was always into music and art.

How do you get your best ideas? My best ideas, really, come from my experiences and culture and other artists and music. For example, I have a signature model called the Cathedral Model. One day, by chance, I ended up at the Cathedral Of St. John The Devine. I'd always heard about it but I'd never seen it. And I looked up at all those statues and walked around and thought, 'I've got to make a guitar with a cathedral on the front of it'. So I built the guitar shape and everything, around the fact that I wanted to put a cathedral on it. It's situations like that that come up for me.

What do you do when you're stuck? I don't think I'm ever really lacking ideas, honestly. There so much around me and I'm one of those people who will even look online for things online that are inspiring, even if it's a shaving mug! 'That shaving mug is beautiful, I'm going to buy it!' I'll go on Ebay or Etsy. Anything one of a kind---is where I come from.

Are you afraid of anything? I think the only thing I'm afraid of is due to where I come from. I don't come from money. I've worked my ass off to be where I am and I'm still working my ass off every day to even afford my rent. So, if something happened to me physically where I couldn't work anymore, or maybe losing the shop. And I know that one day there's going to the moment where I need to make a move, and have my own thing. That's what I don't like so much, because I like working next to Rick. He's my best friend.

What is your most amazing recent discovery? I've been through a lot in the last few years. I lost my dad to cancer, and a bunch of other stuff--- to make a long story short. I've had anxiety problems and it's not been easy. I've learned that I have more control over my mental health than I thought I did, and it's always nice to feel like you're stronger than you thought.