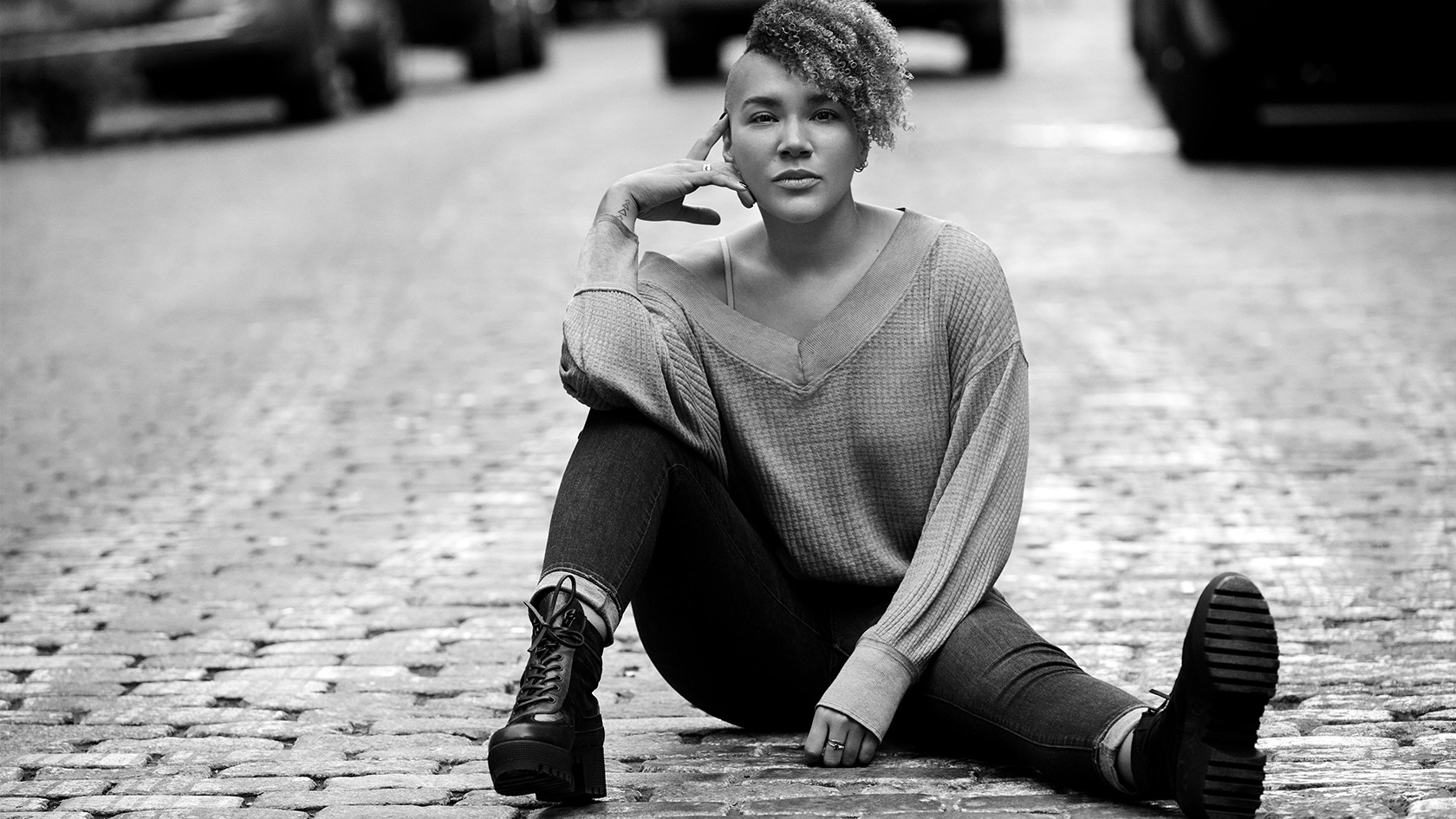 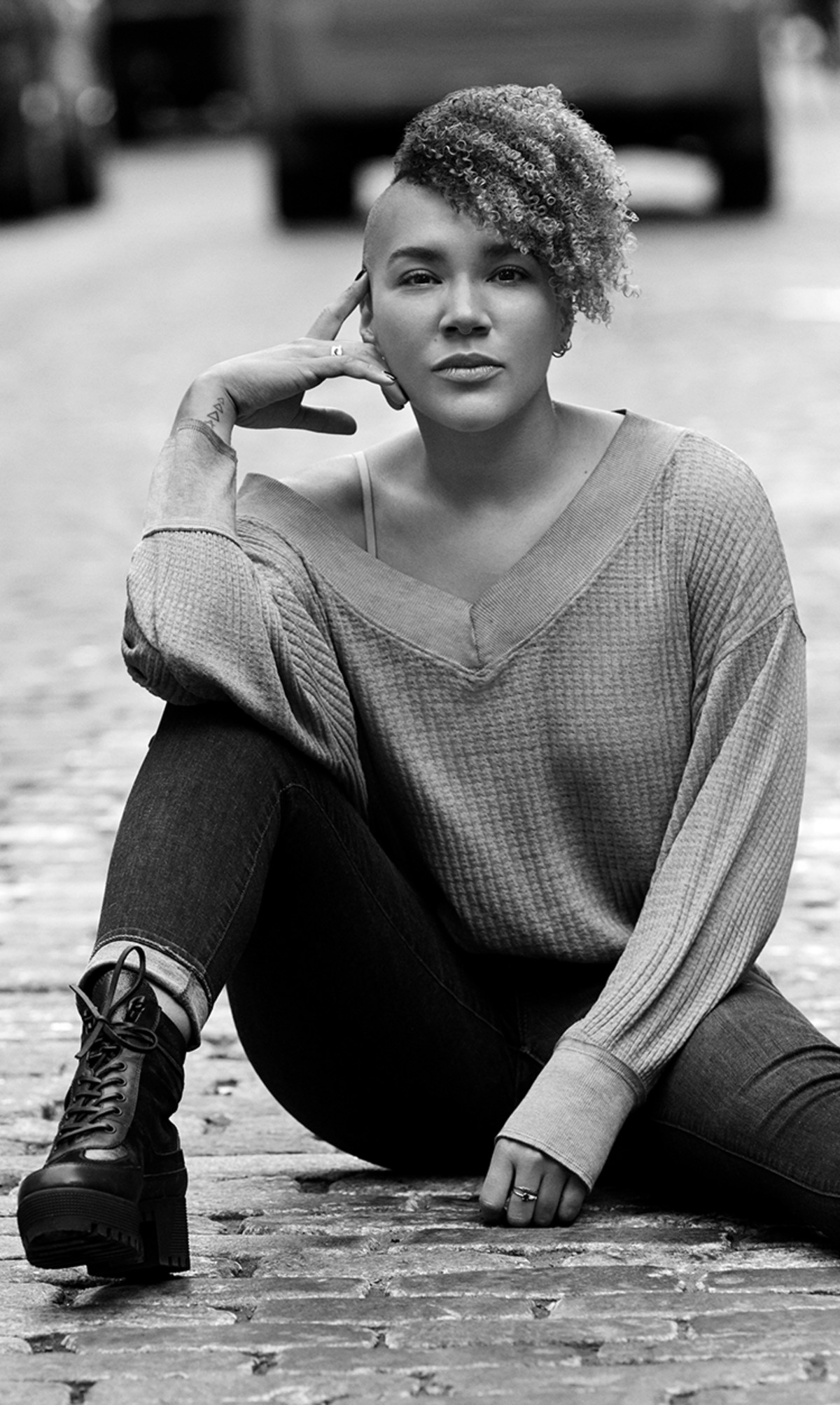 Maybe you recognize Emmy Raver Lampman from Hamilton. She was in the ensemble of the original Broadway cast and then starred as Angelica Schuyler in the Los Angeles and San Francisco productions of the era-defining musical. Now she’s moved to the screen, costarring in the Netflix superhero series The Umbrella Academy along with Ellen Page and Mary J. Blige. We talked to her about life onscreen and off one chilly morning as her boyfriend, fellow Hamilton star Daveed Diggs, quietly tagged along.

How is acting different on tv or film versus the stage?
The biggest difference is the scale. When you are training for Broadway, it’s learning to project to 3000 people, if not bigger. You have to act so it can be read to the last row in the audience. But the fundamentals are the same: there’s a beginning, middle, and end. There’s intention, story to be told, your character has wants. Mostly I think it’s an energy thing. On stage it’s a full body experience. With film, you can just think something and it can register on your face, and that’s enough.

Do you ever get star struck?
When I was doing Hamilton, the Obamas came. We knew ahead of time because the Secret Service scanned everyone in the theatre, there were background checks, and Times Square was shut down. I was short of breath. But then in January I was at InStyle’s Golden Globes party with my best friend. I turned around and Klay Thompson, a starter from the Warriors, was standing at the bar. I am a huge basketball fan. My friend was like, you have to go say hi. I took three steps towards him and turned back around. Finally, I went over and said hello. When we were in San Francisco, the Warriors came to Hamilton a lot and we sang the national anthem at the NBA finals. So I told him, “I sang the anthem for game five and you won”, and he said, “Oh my God, you’re in Hamilton!”

What is your version of a T-shirt and jeans?
I love a high-waisted jean. I never understood it until they came back in fashion. I can feel the low rise is coming back and I reject it! And then for shirts, any pajama I can get away with wearing outside. An elevated pajama is what I’m here to wear. I love T-shirts, too. I was not a graphic tee person until recently but they are a way of saying things now. It’s another form of letting your voice be heard.

How do you get your best ideas?
Trying to create things with friends who share a creative sense is an awesome place to start. I am so blessed to have an unbelievably inspiring group of friends. The message is always: if someone is not going to make it for you, make it yourself.

What do you do when you are stuck?
Traveling is my number-one hobby. When I’m angsty or anxious or creatively in a pickle or drained or just need to wake up and stir things up, traveling is the cure. A couple of years ago I went to Madagascar and volunteered doing construction. I was building toilets and filling holes with coral and creating an irrigation system. Real physical labor. On my way back I went to Thailand. That was my first solo trip by myself. And then last year I went to London, Greece, and Italy.

Are you afraid of anything?
Good God! I’m afraid of dark water. I am obsessed with the ocean and used to want to be a marine biologist. I’ll be watching Blue Planet and it’s like the creatures down there are so scary. Some part of me is afraid of being still. I have a hard time taking care of myself. I have no problem treating myself to a spa day, but taking a break is really hard. I’m always what’s next, what’s next, what’s next, keep the ball in the air. I like to keep volleying the ball but when I have to stop, then what do I do?

What’s your most amazing recent discovery?
I’m really here for oat milk. I’m mildly allergic to dairy. I will never stop eating cheese, but when it comes to coffee or cereal, I talked myself into liking almond milk. But it can really be sour and mess up a good cup of coffee. I love the taste of oat milk and am glad you can find it at most coffee shops. But I heard there was a shortage and tried to buy Oatly on Amazon and one carton was $26!