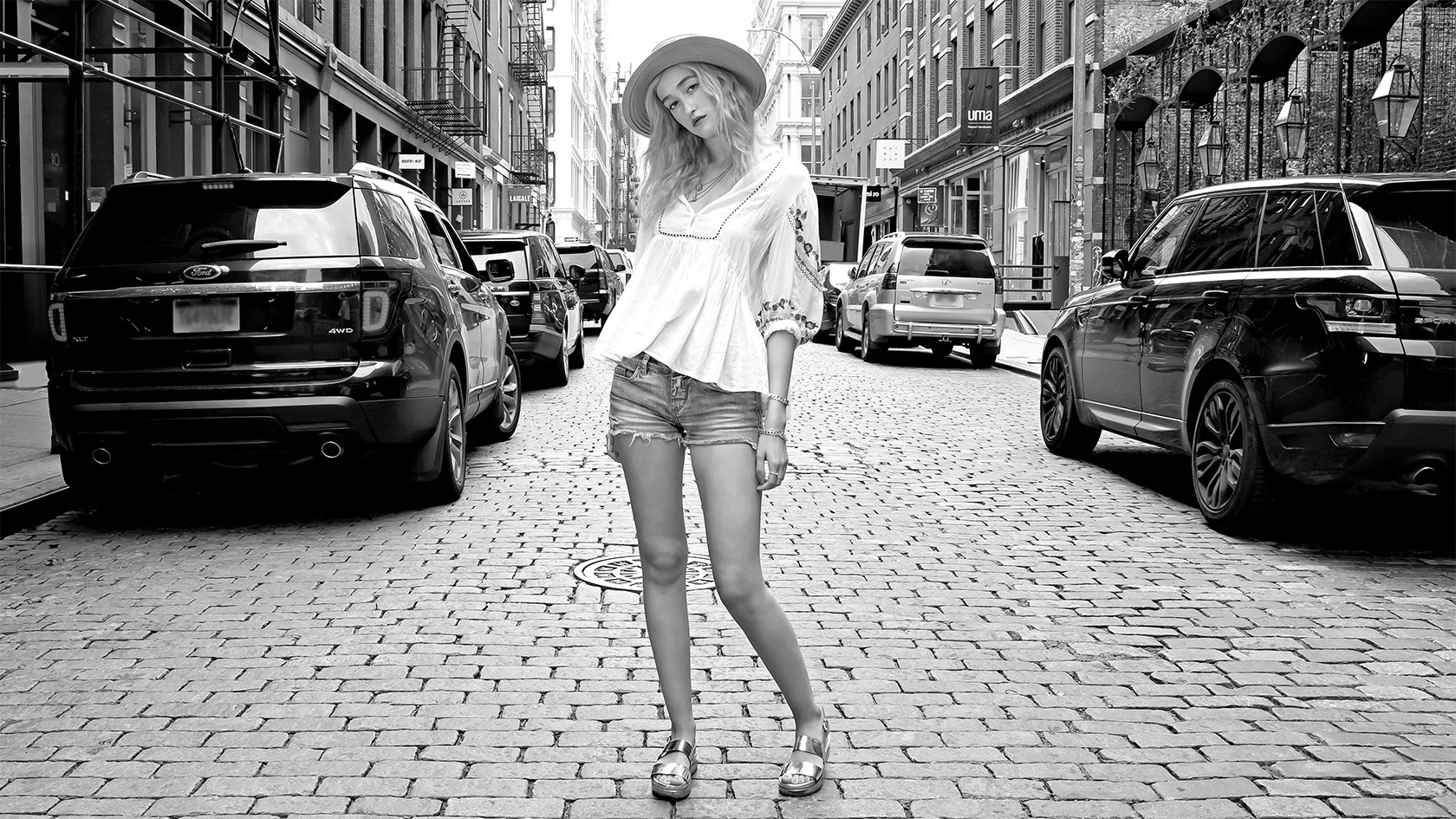 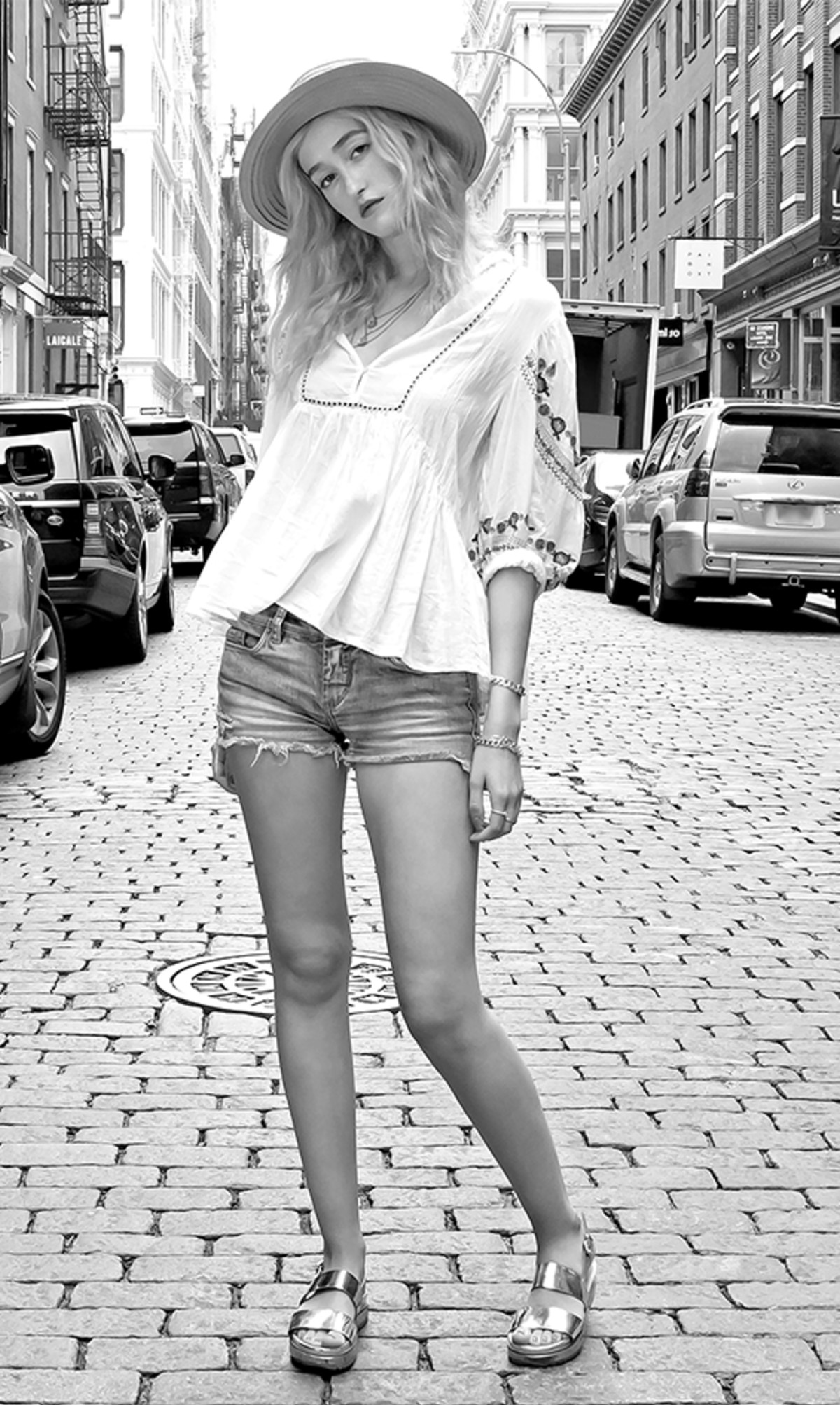 20 year old model, actor, and singer/songwriter Gus Birney looks like she's from another time, so it's not surprising she can currently be seen on Apple TV+'s hot new coming-of-age series, Dickinson, based on 1800's-era poet Emily Dickinson. Born and raised on New York's Upper West Side, Birney attended various smaller performing arts schools and began writing songs and singing at just 10 years old. Gus openly shares that she was "never a school person", and dropped out of high school to get her GED with no plans for college on the horizon. Having two parents who are seasoned working actors, Birney was taught by example and cautioned about "the in's and out's of the business". Their intimate knowledge of what can sometimes be a difficult and cutthroat industry guided the pair to cautiously shepherd Gus into the arts. And by the time she reached high school, they saw that acting wasn't a phase, but a passion of hers. Armed with encouragement and the notion that "if you love it, do it", Birney has accumulated a healthy amount of acting experience on both television and in film, including a theater stint opposite Marisa Tomei and in upcoming Charlie Kaufman film, I'm Thinking Of Ending Things. We discussed her thoughts on being a model, Kanye West's contribution to her hair, and having a mom as a muse.

What is your version of a t-shirt and jeans? I'm much more of a dress person. I wear dresses almost every single day. I'm into flowy, boho stuff right now. I don't like feeling constricted, that's why I wear dresses all the time. Right now I'm wearing denim shorts that I stole from my best friend, and this top is from Zara. I love Zara, it's not expensive and it has the best stuff. I also love Anthropologie and Free People. My style is very feminine with an edge, and a bit "country". I wear three bracelets every single day. Three years ago my mother got me an ID bracelet that says "courage" on it, then came one that says "faith", and a third one says "grace". I think these are words she thinks I need more of. I wonder what this year's will be! I love wearing a mix of dangling earrings together, I'm so into that right now. I'm planning on getting more piercings.

You're a model, you're a singer and songwriter, and you're an actor. Is there one that stands out, in terms of what you consider yourself? Acting is my "homebase". But all of them intertwine. For example, having an acting background helps me to model.

Is there anything you don't you like about modeling? It's cliché to say, but what I don't like is how everything is based on a person's exterior. Because I think the best parts of me are within. Modeling can take a toll on how you see yourself, especially during a person's formative years, around ages 14 or 15. That's when I started. It made me aware of things I shouldn't have been aware of at that age. It ages you a little. There are a lot of ups and downs to modeling, but I have to say, there's something so glamorous, artistic, and special about it.

What do you consider to be your "break" into acting? When I was 16 I got a role in The Mist, a (then) Spike TV show, which is now on Netflix. I spent four months filming in Canada, and lived what was this otherworldly experience for me. I fell in love with that experience, and I continue to fall in love with the acting experiences that have come my way.

How did you get into playing music? When I was 10 years old, I saw the movie The Rocker with Rainn Wilson, and I thought Emma Stone's character was the coolest in the world. She played guitar and wore black nail polish. So I started taking lessons and writing songs, and playing guitar became my therapy. I was so anxious. I mean, who isn't in this day and age? Singing became my way of speaking my inner thoughts. I knew I didn't want to be a pop star; I knew that wasn't my path. I wanted to write songs for me. My parents noticed that I was writing all the time, so my mother set me up with a producer who I've recorded several songs with. A dream for my music is to have it be featured in a film. And actually, that's kind of come true for me. One of my songs was used in the film I did with Sarah Jessica Parker, Here And Now. Fabien, the director, saw me performing my music on my Instagram and wanted to use it for a scene in the movie. I'd never saw myself as a songwriter, but my mother has encouraged me to keep pushing forward with it.

How do you get your best ideas? Honestly, through my mom. My mother and I are so close, and I talk to her about everything. Through talking to her, I discover so much more about myself. I know that's a weird answer. I think sometimes she knows me better than I do myself. She understands me in a way that no one else does. She helps me to zero in on ideas I wasn't even aware of.

Why is your mother such an inspiration to you? She took fifteen years off to raise my brother and I. She's the fiercest person I know. She's so unapologetically herself. I could cry talking about it. It's hard to own who you are, and my mom does that so well. If I can do a tenth of that by the time I'm an adult, I will think I've succeeded.

How do you find creative inspiration? I watch some of my favorite movies. There's this movie, Defending Your Life, which is my all-time favorite. People think it's a funny movie to love. But it really gives perspective on life. I also think watching documentaries can help you to get you out of yourself.

What do you do when you're stuck? Sometimes we can get stuck in a moment. My mantra is "this too shall pass". I remind myself of that. If I'm dealt with an incredible low, I'll remember that within twenty four hours something I thought was the end of the world, can be turned around.

What's the story behind your hair color? I have naturally auburn hair. I got cast in Yeezy's season two fashion show, and I had to dye my hair. I was told that Kanye wanted to bleach my hair and bleach out my eyebrows. At 1am, I had it done at this teeny salon in the West Village, because that's when I got the call. I always wanted to go blonde but this was alien platinum! Years later I dyed it back to its original color and I hated it, because it wasn't the right shade. So a day later I went back to dye it blonde again. And now this is the end product!

Are you afraid of anything? I have so many dreams and ambitions, and I know that acting is what I want to do. It's something that makes me feel better about myself, and it also makes me feel like I'm contributing to the world in a way that's positive. It's something I'm proud of. I'm afraid of giving up on myself. I'm afraid that the negative voices in my head will overpower the positive ones.

What is your most amazing recent discovery? Exercise can cure all angst. I'm extremely into barre classes right now.