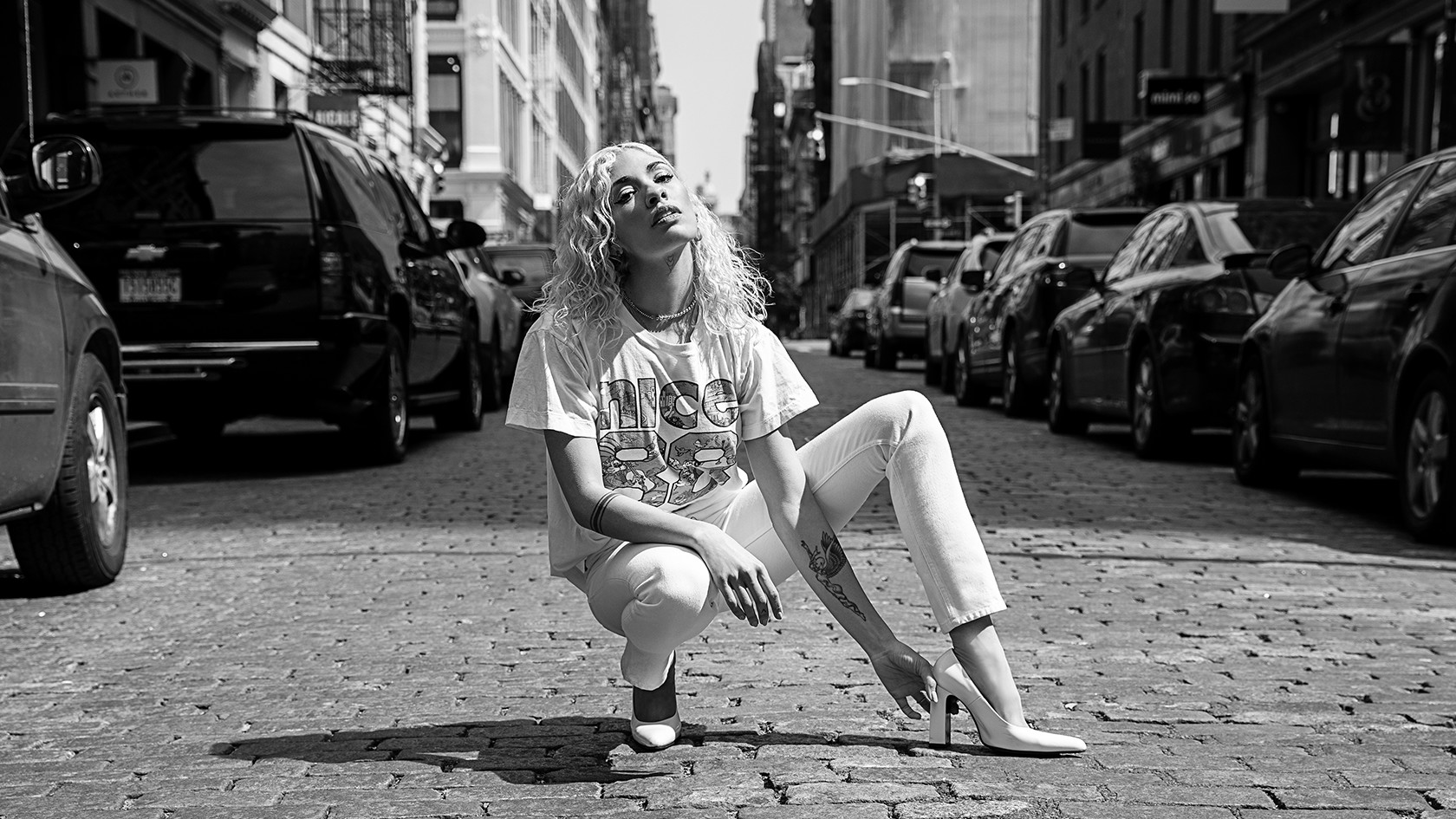 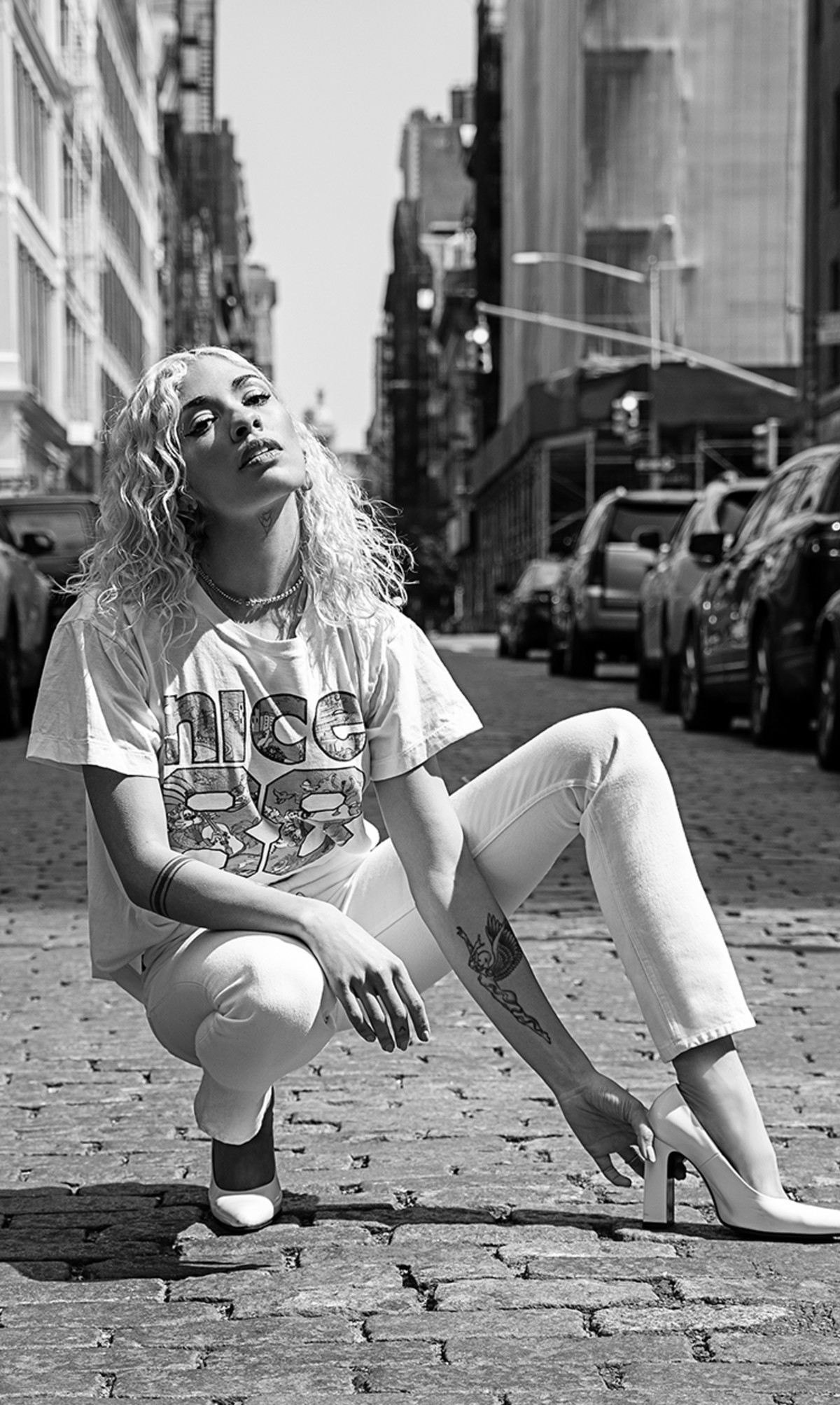 Stella Santana's approach to making music is deeply thoughtful and considered. Pair that with her rule about being present in all she does and her strong work ethic, and you could easily call her a perfectionist. Never letting an outing or commitment go unfulfilled, Santana keeps a highly organized calendar. After our shoot, she insisted on getting our upcoming podcast on the books before she walked out the door. She doesn't like for things to go "unfinished", a mindset that will surely serve her well as she continues to build her career as a multitalented artist. Yet she's too soulful for what the uptight label of perfectionist suggests. She understands that life is filled with nuance and she's spent time not only getting to know herself, but others. The vocalist, songwriter, producer, and daughter of Carlos Santana once studied to become a life coach. An arbiter of style who favors Balenciaga, Santana puts a stamp on fashion that is all her own. It's not surprising that she has her own creative director, making sure that stamp of style is infused in every visual project she's involved in. Growing up in Marin County, California, the artist had to get herself to New York, namely the Lower East Side, where she creates and calls home. We talked about being self aware, getting the best ideas and how to hold onto them, and the killer vintage tees she inherited from her father's massive collection.

When did you know you were going to be a performer? I sang when I was little. I played piano and saxophone but I hated it. I was super shy so I stopped doing it. And then, when I was either 26, 27, or 28, I wanted to start recording covers for fun. And at one point I accepted it. If I'm going to do this, this is everything that comes with making music. I understood that I would deal with how it feels scary and uncomfortable later. And then, with routine and continuing to show up, that scariness would become less scary.

Do you find that you do that in life and in general, that you challenge yourself? If I know that something I want is on the other side, yeah. But I'm not trying to go skydiving or anything.

What was the first cover you recorded? Wicked Games by The Weeknd. I played it on the piano and sang it into my laptop's microphone. I didn't have a real mic or use headphones.

What is your version of a t-shirt and jeans? I have a bunch of vintage tees from my dad (famed guitarist Carlos Santana). He has a warehouse full of them, and I picked some out for myself. I have about 10. They're super comfy and cozy and I like to keep it casual. I have white jeans, black jeans, blue jeans. I have these cool jeans that have a zipper all the way up the side. And I always wear this green garnet ring that I got at Dover Street Market. My birthstone is garnet, and I was drawn to it in some cosmic way.

How do you get your best ideas? Looking at other people's stuff. I get a lot of ideas in the shower. I think people get a lot of great ideas in places where they can't write shit down. Being around running water gives people great ideas. And being around plants.

Are you afraid of anything? Being murdered! (laughs). Just normal stuff I guess. I'm very aware of my mortality which I think helps me to be super present. I think, "this is the only thing I have at this moment, it's time to focus, I won't have this moment again".

What is your most amazing recent discovery? I've been working with production creation software. And I generally don't do the software stuff. I let someone else do it. I just dictate what I hear and they figure it out. I don't want to take the time, because my ideas come faster than what my skills allow for. But I'm starting to dabble in it so I can have ideas on my own, get them out, and give them to someone else. That way, I don't always have to be building with someone else. I'll be able to build my own stuff to a certain degree and bring it in when it's time.

What's on your "bucket list", professionally or personally? I want to develop artists and help them become more of who they are, as opposed to who someone thinks they should be. I want to help create both a sound and a vision that enhances who they are as an artist. I think that benefits everyone.

*Stella Santana's podcast with Story + Rain launches on July 26th + you can listen to her latest song, "Yayaya", here.