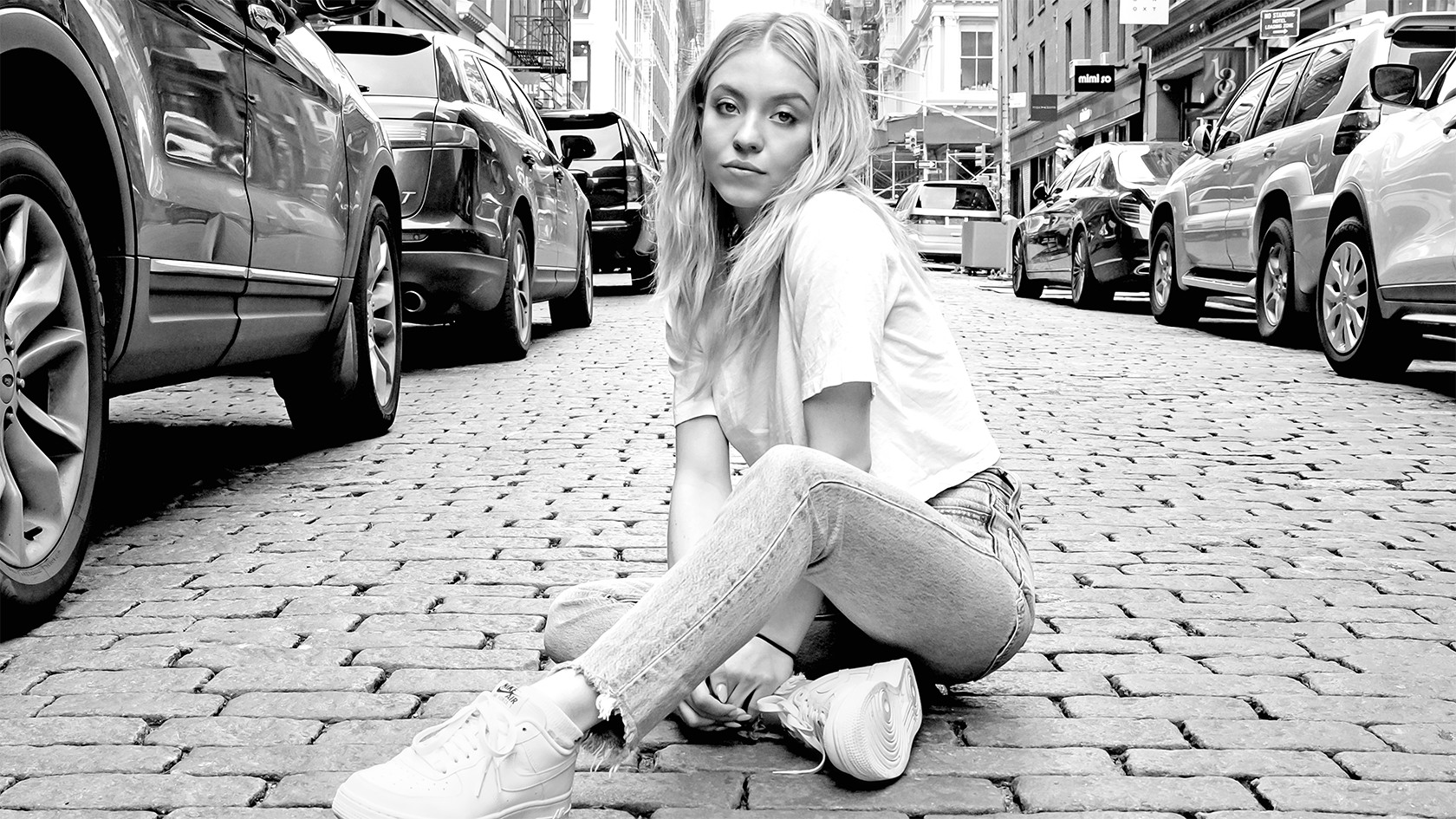 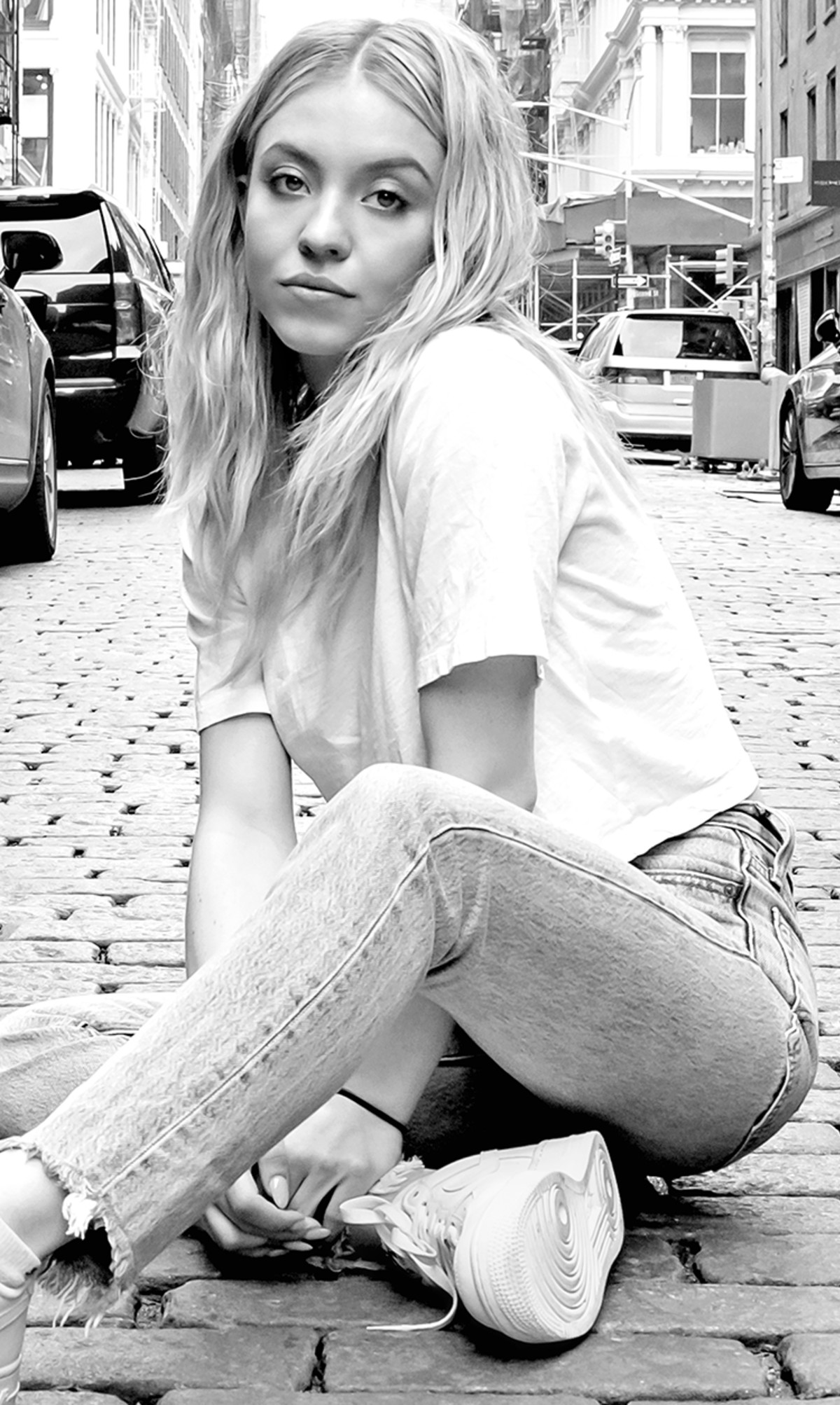 Twenty one year old Sydney Sweeney is having a big summer. She's currently starring in the series making serious waves, HBO's Euphoria, and has a role in Quentin Tarantino's eagerly anticipated new film, Once Upon A Time In Hollywood, to be released at the end of July. At the time of this interview, Sweeney was preparing to leave for Paris where she sat front row at the Miu Miu Couture fashion show, a coveted opportunity that is every fashionista's dream. It all started with her desire at a young age to act, "never imaging being one thing for the rest of my life". And then, at around 11 years old, an indie film crew came to town. In order to win her parent's approval to audition for it, the Spokane, Washington native created a five year business plan. That did the trick, she booked the role, and the rest is history. Two years later she moved to Los Angeles. Having appeared in three television series in 2018 alone, including acclaimed hits The Handmaids Tale and Sharp Objects, Sweeney tells us her dream is to play as many different characters as possible. We can see she's well on her way.

What is your version of a t-shirt and jeans? I am a huge t-shirt and jeans person. I probably have every style of Levi's one could possibly have! 501's are my favorite. I love a good high-waisted jean. And cropped t-shirts or tank tops. I love All Saints t-shirts. If I'm going out, I'll probably pair my jeans with a Gucci shirt, or just dress them up a little bit. I love to pair jeans with platform sneakers,. I don't like flat-flat shoes because I feel short, so I like wearing sneakers that have a platform sole. I have a pair of Gucci shoes that have platforms with Swarovski crystals on them. And these Nike's are one of my favorites, because they have my name "Syd" on the back, and are in my favorite color, baby blue. I usually wear these with my jeans. And I wear this gold heart and diamond necklace every day, it was gifted to me for my 21st birthday by someone very special. I always wear a hair tye on my wrist, usually on my left wrist.

I see you're rocking long nails, are they yours or are they tips? My own nails are actually really long, but I got these acrylics for the premiere of Euphoria, and the MTV Movie + TV Awards. I don't know how I feel about them yet!

Do you love fashion? When I was younger I never understood it. I still, to this day, wear overalls or jeans. Sometimes I feel very intimidated by fashion because of how laid back I am, but when it comes to the red carpet or press, I love mixing it up and finding different designers. Yesterday I had a press junket day and had four different looks over the course of five hours, and I loved it. I'm off to Paris because I got invited to the Miu Miu Couture fashion show. It's my first fashion show, so I'm very excited. And I love Miu Miu, Miu Miu is one of my favorite designer collections.

Do you have a red carpet look that you've worn that's a favorite? My Reem Acra dress for the Emmy's. It was strapless, in princess pink, with a crystal waistband. I always imagined feeling like a princess for my first red carpet, and I did, and I loved it. And my SAG Awards dress is a favorite. It was a beautiful, modern, Delpozo one shoulder dress in white and orange, with a little bit of train. Those pictures turned out beautifully.

How do you mentally prepare for your role on HBO’s Euphoria? I create books to build the characters that I play. I create an interactive timeline, journal, diary of their entire lives from the day they were born to the first page of the script. I spend a couple of hundred dollars at Michael's! I buy a book and I decorate the whole thing and write tons of stuff down. There are sections to each book. There's the timeline of her whole life, a section for her relationships, her memories, what her world looks like. And I have a section for where the script starts. I believe that when a character is in a scene, she's still living. So I have a section for what happens between every scene.

When do you start the process of creating your character's book for a role? Usually on the day I get the role, I'm like, "I'm going to Michael's! I'm getting my book!'. And it depends how long I have to finish it. I typically finish it before my first day of filming. For Handmaid's Tale, I had a week to make her book, and for Euphoria I had a whole entire summer to make her book.

With the subject matter of Euphoria being quite heavy, do you find it hard to rid yourself of that heaviness? No. Because I make the character so separate from myself, I'm able to just jump in and out of it. I'm able to move in and out really fast. I've never been stuck in a character.

How do you get your best ideas? I access the content that I'm given, and take it from there. Growing up where I did has allowed me to have such a free, creative mind. I had an amazing landscape to grow up with. I was always outside, my parents always wanted me to play outside. I didn't have my first phone until I was 13. I was never on electronics. I was always reading books. I was building treehouses. My parents kept the kid in me alive for as long as they possibly could. I believed in Santa Claus until the seventh grade. My imagination was nurtured. I'm able to use that in my work.

What is your most amazing recent discovery? I'm really into truffles. I went to Oak Tuscan Truffle Lounge here in New York and I had a truffle burger, truffle spaghetti, truffle roasted potatoes, and a truffle dessert...it was the most amazing meal. I'd recently gotten into truffle meats and cheeses, and this meal took it to a whole new level. But it started with my favorite restaurant in California, Wally's. They have this amazing meat and cheese platter. In the past year I've opened up to food. I used to be a really picky eater, and for whatever reason my palette has changed and I'm really into food now. So I've been trying a lot of things, and truffles have really stuck with me.

What else is happening during your busy summer ahead? After Paris I'm going to the Amalfi Coast, and I'm renting this amazing house that overlooks the ocean with a private pool. I found it on Airbnb and got it for such a great price, so I'm happy. It's a little outside of Positano, which I like, because I like the privacy of not being in the middle of everything. It's a week to finally relax, and get tan. I haven't been able to get tan or go anywhere. I've been working nonstop for years so I'm pale as a ghost. I'm going to lay out, eat lots of food, and go on some hikes!