When Billy Joel sang the lyrics Red China between the names Doris Day and Johnnie Ray back in 1989’s hit “We Didn’t Start the Fire,” he was appropriating jargon. It was words that the United States used to brand China, as communist. But, chances are if you ask anyone born after 1989 in the U.S. or China, not only do they not know the pejorative term red china, they don’t know Day or Ray either. (I mean, I don’t know who the latter is either.) It’s also quite possible they don’t even know who Billy Joel is — if they do, they’re definitely not streaming him on the regular.

And yet, stylistically, aesthetically, instagrammably, China is very red. That red — be it crimson, ruby, cherry, cerise, scarlet, and blush is ubiquitously fashioned across the mainland. It’s sensual, romantic, playful, daring, individualistic. It’s your China Red nail polish and Cherry Bomb lip stain. A pop of color, of modernity, set against dynasty-ancient and communist-contemporary backdrops conjuring unexpected joy and humor, rather than assumed oppression. China, more so than not, presents as a destination totally unlike everything we are told and taught through our Western lens.

To be fair, it’s true: If you don’t speak Mandarin, you’re not going understand a single bloody thing anyone is saying. You won’t have a clue without exceptional miming, pointing, and translation apps anything anyone is saying. Without Mandarin skills, you absolutely will not have a live like a local immersive travel experience on the mainland. You will not get to know anyone native. But even still! China’s growth and expansion is proof that you don’t need English to be a major global player and you don’t need any Chinese dialects to see what’s up. (Not feeling it? In Hong Kong, English is spoken. The former British colony is total China Lite, a more vertical Manhattan, a greener London or Paris.)

But for those of us excited by an exotic, faraway, utterly different allure, mainland China is it. Not speaking the language doesn’t mean you can’t get around. Thanks to some really impressive well-invested infrastructure and the gorgeous glory of the Baidu Translations app, or, a VPN download to enjoy Google Translate. Then there’s the superior WeChat that puts WhatsApp to shame. A most valuable tip? Download as many recommended apps as you can and get your VPN business together so you can access your social networks. When I return to China next, given I have a ten-year visa, I will be on the up with the QR code exchange. Terrified or not, that futuristic way to move through life. The Chinese have readily surrendered their privacy for mobility and easy pay convenience, and eventually, we’ll be joining them too. Until then, can you believe that the 3 & 4G cell service was so clear and smooth that we FaceTimed home from The Great Wall of China?! And without a missed beat.

But back to those Mainland maroon vibes. Such vibrancy appears in choice pieces within nearly every woman’s wardrobe. Capital city Beijing was full-on at Tiananmen Square where ruby-hued twin sets, burgundy sweater dresses, high gloss bomber jackets complimented chemically curled coiffures and angled bobs —poised and giving their best angles before selfie-sticked iPhones. The red brick background of the Forbidden City with the solemn portrait of Mao, supports a foreground where Chinese and the occasional Western tourist flashes a peace sign and a ciao. 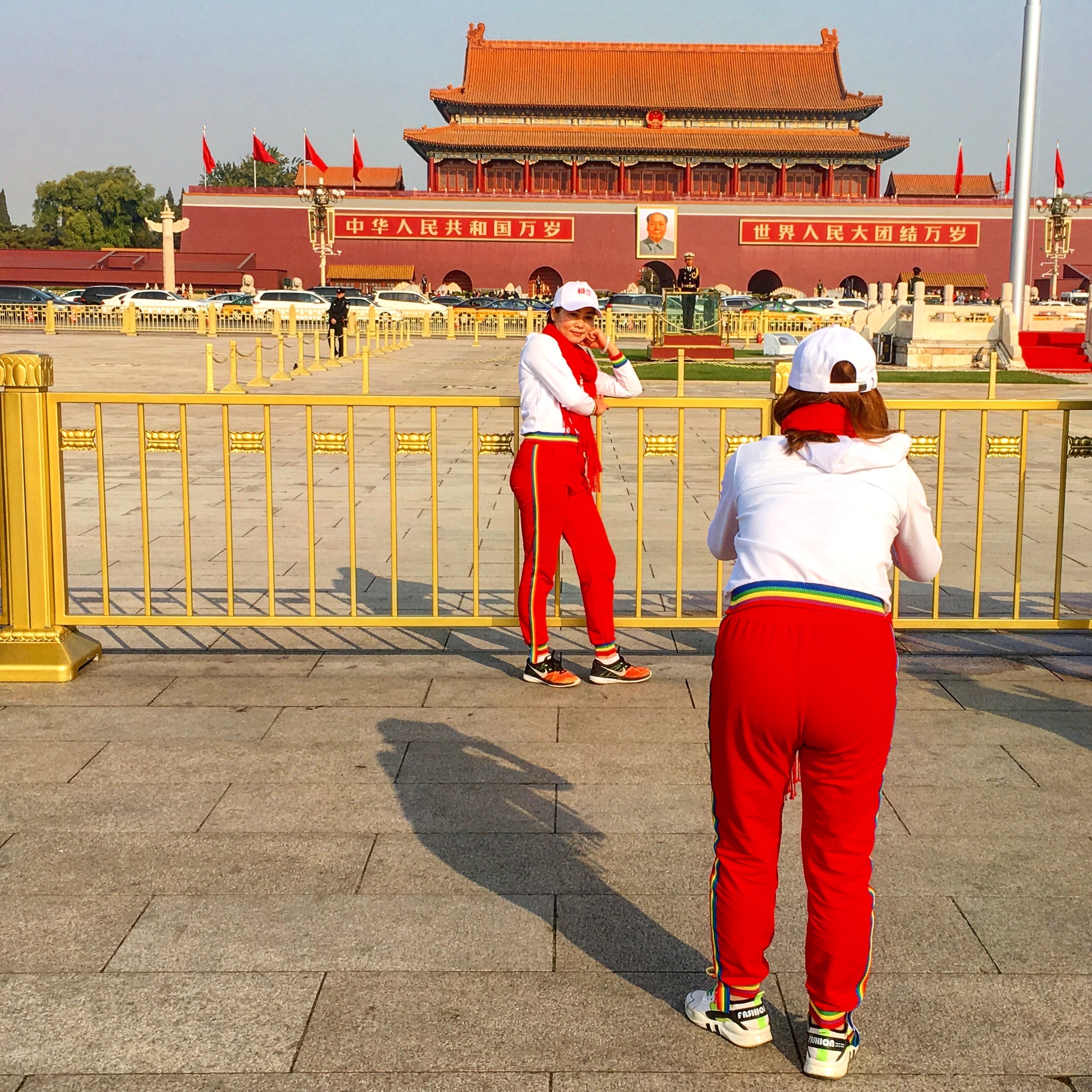 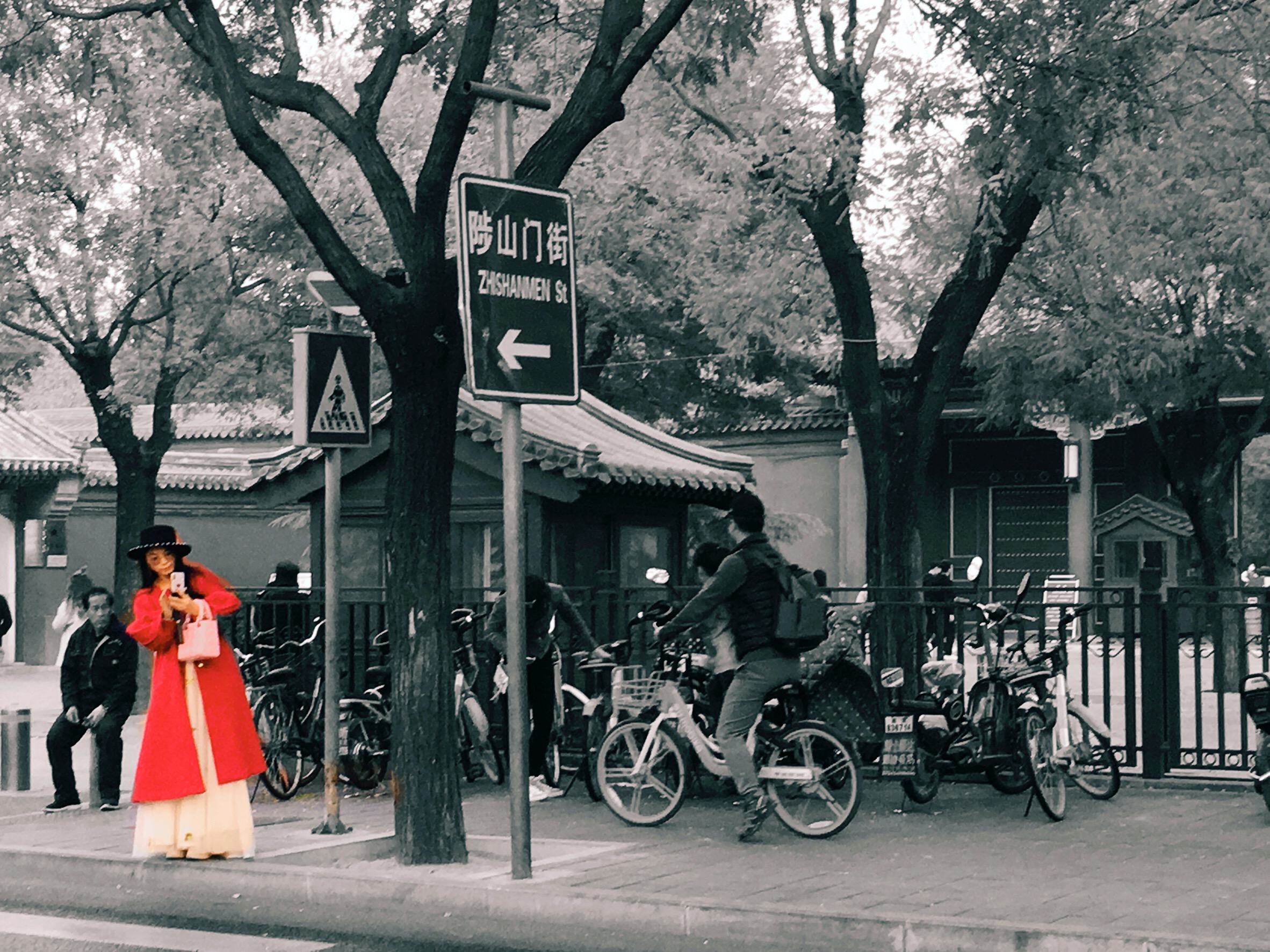 Beijing for me was the ultimate flashpackers experience. One night was spent in an AirBnB within the Dongsi Subdistrict. Our accommodations were in a traditional hutong — a neighborhood of long, skinny alleys formed by rows of grey brick courtyard residences, each framed with decorative timberwork, floral appliqués and nearly always adorned with a splashy red door. Authentic and otherworldly, walking to get lost within it all felt as if we’d time traveled to a 19th century communist ghetto. The dings of bicycle bells, the gentle gunning of a moped accelerating too close, and nearly nipping our ankles, the purr of sweet street kitties after lapping up spots of milk left out just for them. And yet, across town, architectural and financial worlds away, the next night we unapologetically spent at the Ritz Carlton. For $200 a night, the water was instantly hot, mattress plush, thread count high, sweeping 15th floor views epic, and the breakfast buffet deliciously dim sum, dumpling, congee and noodle soup Chinese. One of the very few white faces we saw during our mainland travels did say that in his years living there, the Ritz’s crispy Peking duck was still considered the best in town – and among the priciest.

On either side of town, in parks like Beihai, and UNESCO-designated site such as the Summer Palace, red always at least makes a cameo if not a feature appearance as a starring shade. Women and some men simply rock the tone with hipster spirit, or, a cosmopolitan chic. 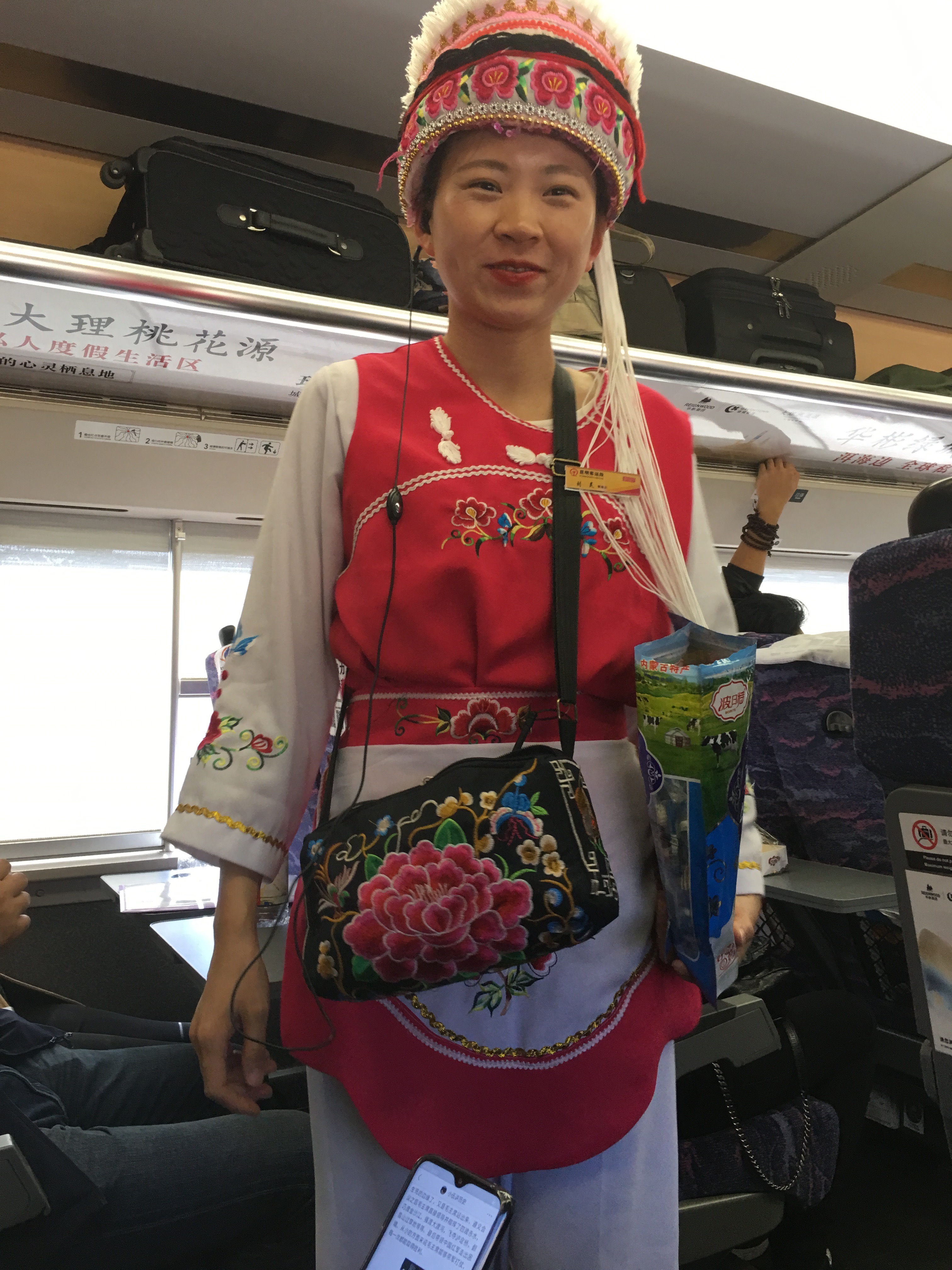 A cross-country flight and speed train ride later soon left us in Southern China’s Yunnan province, and specifically, in the mountainous town of Dali, home to the Bai ethnic minority. Charming, bustling, teeming with Chinese bohemians with an affinity (but not a fluency) for English text. A day and evening was spent roaming the adorable, small shops decorating the aptly titled Foreigner’s Street. As we strolled voices resembling Sarah McLaughlin, Fiona Apple and Liz Phair in Chinese (with an occasional English cover) seduced us into far too many mid-afternoon local beers. The smoky, competing aromas of tasty street meat sticks taunted added calories and we dared not guess what part of the cow or pig such tantalizing juiciness derived.

Boutiques all sport and sell that Notorious R.E.D. – tailored jackets, and sun dresses, haute couture carpet trenches, and high-waisted gauchos — all come in crimson tones. Instagram influencers you’ve never seen or heard of before, yet boast a million followers abound in Dali. They come with a small army: photographer, lighting guy and a stylist. 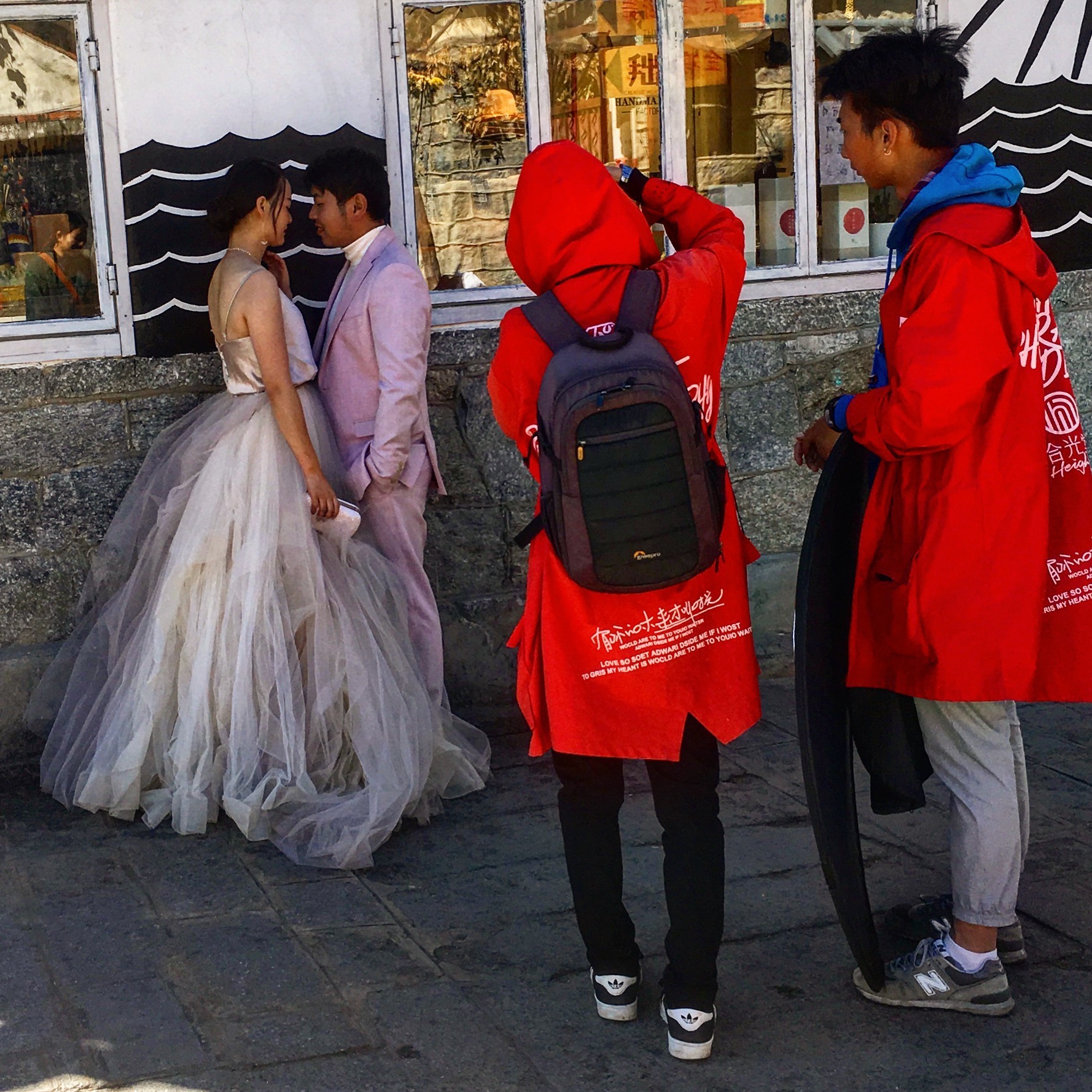 We stayed at the Fairyland Hotel Dali Zhongheju, not to be confused with the other Fairyland, less than a half-mile away, and also quirky and adorable. We learned first hang how integral translation apps are in such a situation. The correct Fairyland was stunning, a 100-year-old traditional Bai house luxuriously renovated. Our penthouse room was authentic and unexpectedly quirky, thoughtful and decadent. Again, although things are exceptionally nice, user and Western friendly, no one speaks English. Again, the combined powers of miming and generosity is what got us our red sweatered cab driver who delivered us back to the train station without delay.

Before then though, I spotted a girl sporting a pink sweatshirt with the English words My Girlfriend is a Feminist etched across her chest in black block letters. Wow, I said to my friend. The Bai are super progressive. Unable to resist, I mimed to her if I could take her picture. She agreed but we struggled for her to understand that it was because of the message across her top. She didn’t know what her shirt said, but she did know that today when she had dressed, she left her home delightfully matchy matchy. Across her mauve upper was a pale pink crossbody and below, two-tone, burgundy and pink sneakers paired with a gauzy black skirt. 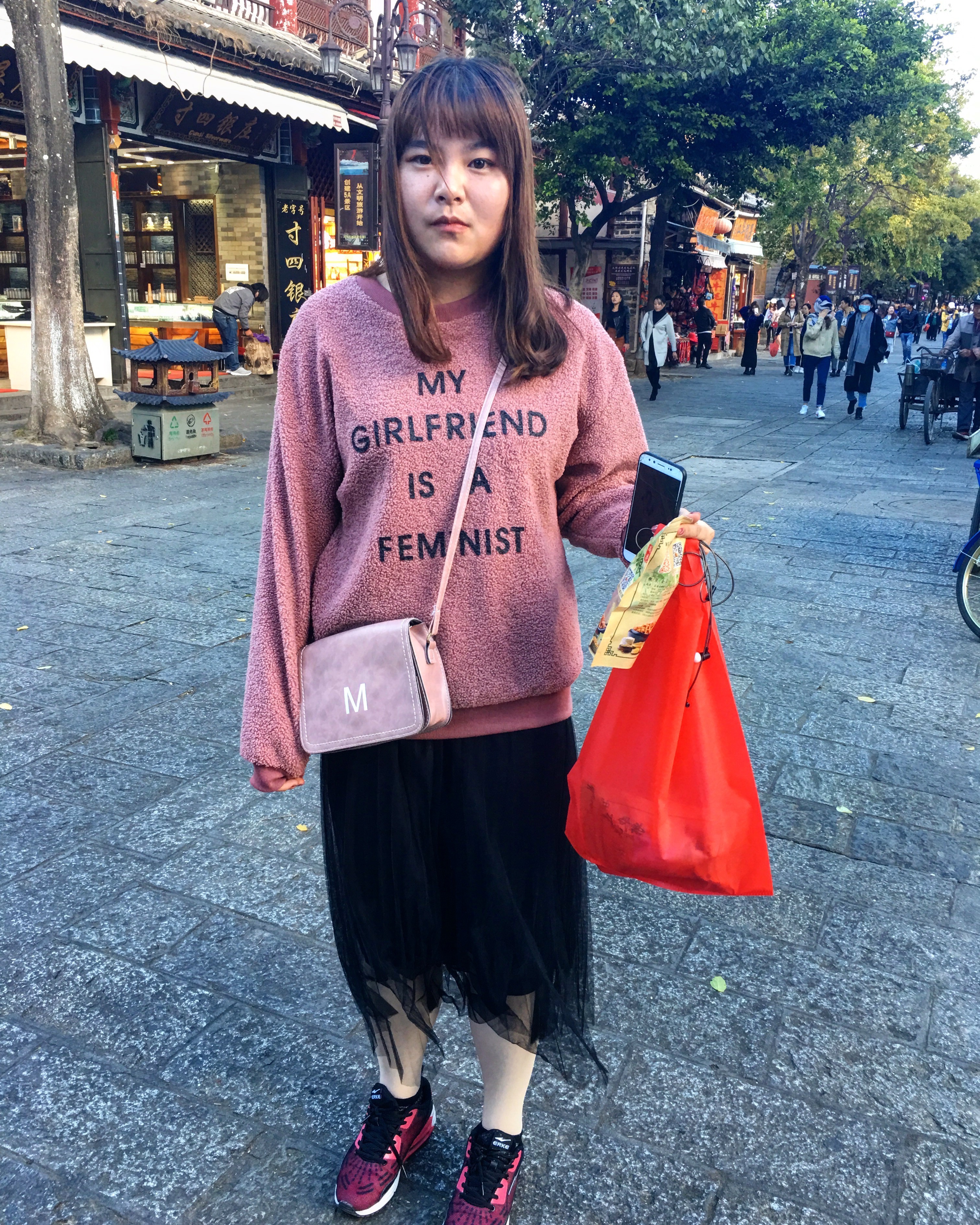 Seriously, until we curious outsiders learn Mandarin, there’s a lot to observe and take in. Lots of shades of red to notice. Lots of tea to drink, many smiles to share, and all the heart felt shieh shiehs (thank yous) are much appreciated. 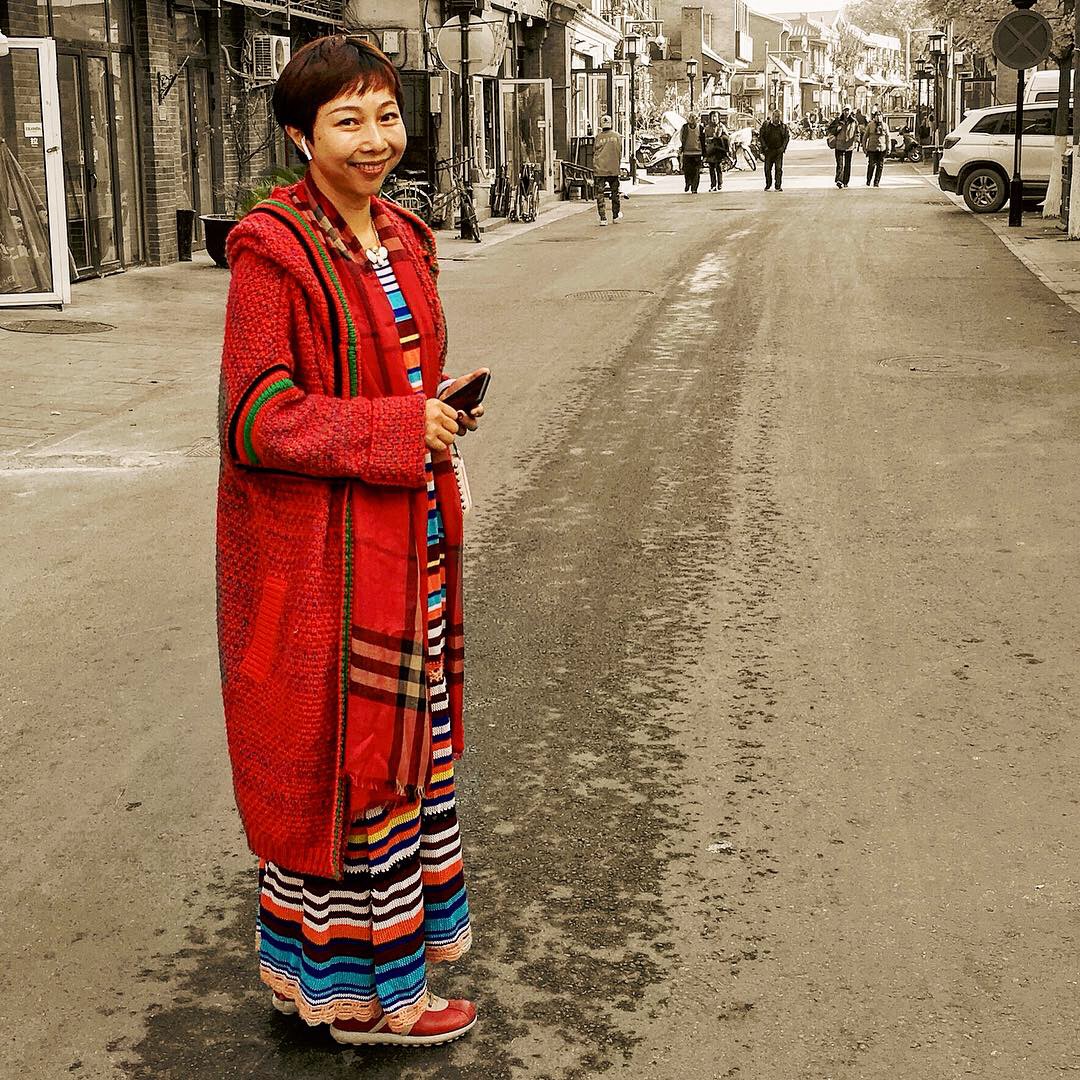