To make the sweet potato casserole: Heat the oven to 350℉

Pour the sweet potatoes, syrup and all, into a baking dish. Add the brown sugar, salt, and cinnamon and stir until thoroughly combined. Cover the dish and bake in the oven for 35 minutes or until the potatoes are super mushy. Coarsely mash them.

Transfer 1 cup of the mashed sweet potatoes to a heatproof measuring cup, reserving the rest for another time. (Tip: It will last in the freezer for up to 2 months. Thaw and gently warm before using.)

Let the 1 cup of sweet potato mixture into an ice cream maker and turn on the machine. Churn just until the mixture has the texture of soft-serve.

Quickly transfer the ice cream into freezer-friendly containers. Spoon in layers of ice cream, sprinkles of praline, using a spoon to press them in gently, and a few generous dollops of maple fluff. Repeat.

Cover with parchment paper, pressing it to the surface of the ice cream so it adheres, then cover with a lid.  Store it in the coldest part of your freezer (farthest from the door) until firm, at least 6 hours. It will keep for up to 3 months.

To make the brown sugar pecan praline: Line a sheet pan with parchment paper and coat the paper lightly with nonstick cooking spray.

In a medium saucepan, combine the milk, granulated sugar, brown sugar, butter, and vanilla, stir well, and attach a candy thermometer. Set the pan over medium heat and cook, stirring often, until the mixture registers 238℉ on the thermometer. (It’s okay if it starts to crystallize.) Immediately stir in the pecans so they’re completely coated. Keep stirring until the sugar begins to crystallize and become crumbly, about 20 seconds more.

Remove the pan from the heat and let the mixture cool until it’s as thick as warm caramel, 5 to 10 minutes. Stir again, then scrape the mixture onto the prepared sheet pan, spreading it out to get the pecans in a more or less single layer. Let the praline cool to room temperature.

Remove the praline from the sheet pan, peel off the parchment, and crumble the praline into approximately 1/4 - inch pieces. Freeze them until cold and then use in the ice cream or transfer to freezer bags and freeze for up to 2 months.

To make the marshmallow fluff: In a stand mixer fitter with the whisk attachment, beat the egg whites on medium-high speed until they’re foamy, about 2 minutes. Add the cream of tartar and continue to beat until the whites reach the soft peak stage, about 3 minutes. Reduce the mixer speed to the lowest setting and leave it on while you heat the sugar.

Mix the sugar, 2 tablespoons of water, the corn syrup, and the maple syrup in a medium saucepan, and attach a candy thermometer. Set the pan over medium-high heat and cook, stirring constantly, until the syrup turns clear, about 2 minutes. Then keep cooking, without stirring, until the syrup registers 238℉ on the thermometer. Immediately remove the pan from the heat.

Raise the mixer speed to medium-low and drizzle the hot sugar syrup into the egg whites in a thin, steady stream, aiming for the hot syrup to hit only the whites and not the bowl. Once all of the syrup is incorporated, raise the mixer speed to medium-high and whip the fluff until it is just warm to the touch and has a glossy sheen, about 2 minutes. It will keep in an airtight container in the fridge for up to 2 weeks. 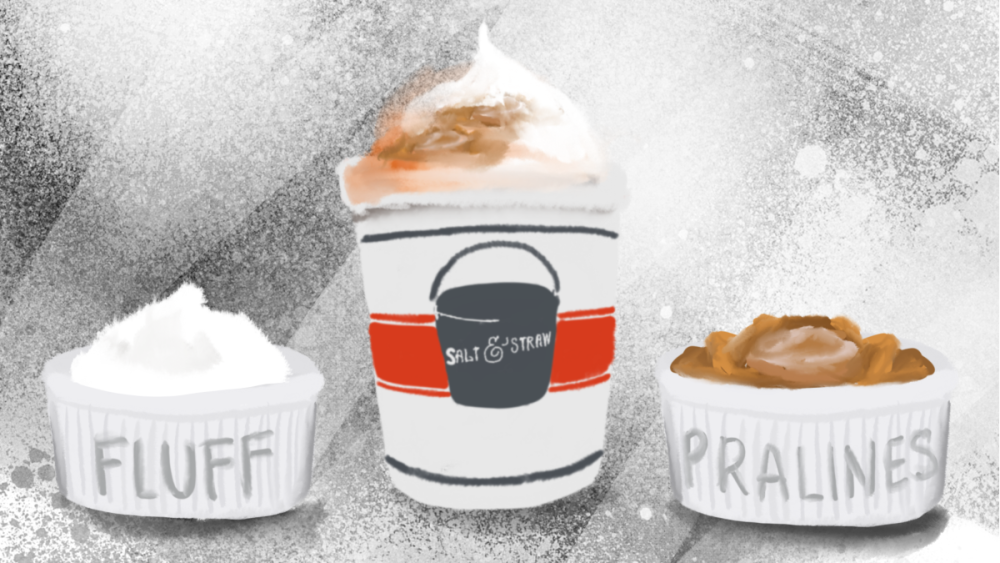