Getting Into Character With Maggie's Rebecca Rittenhouse 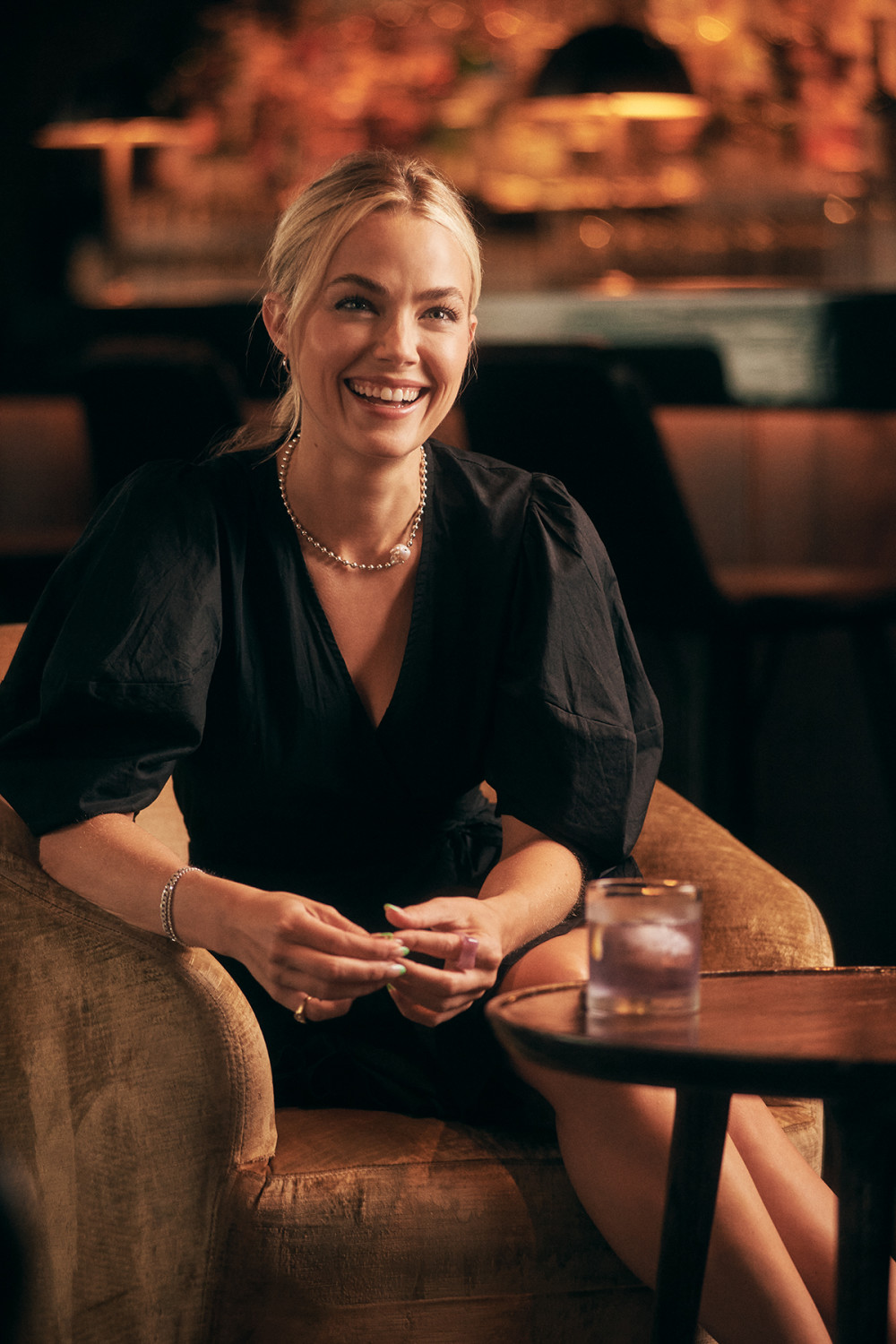 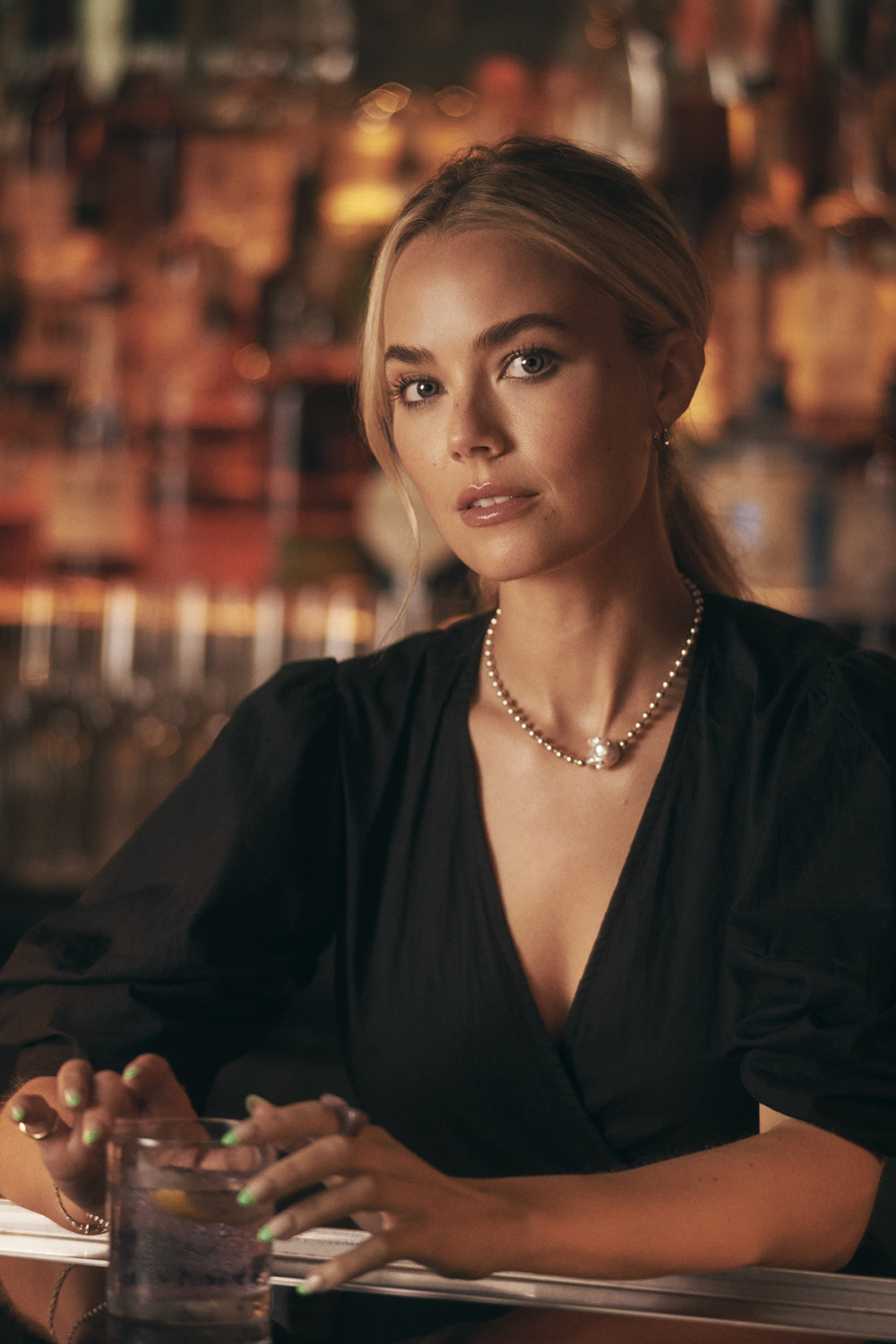 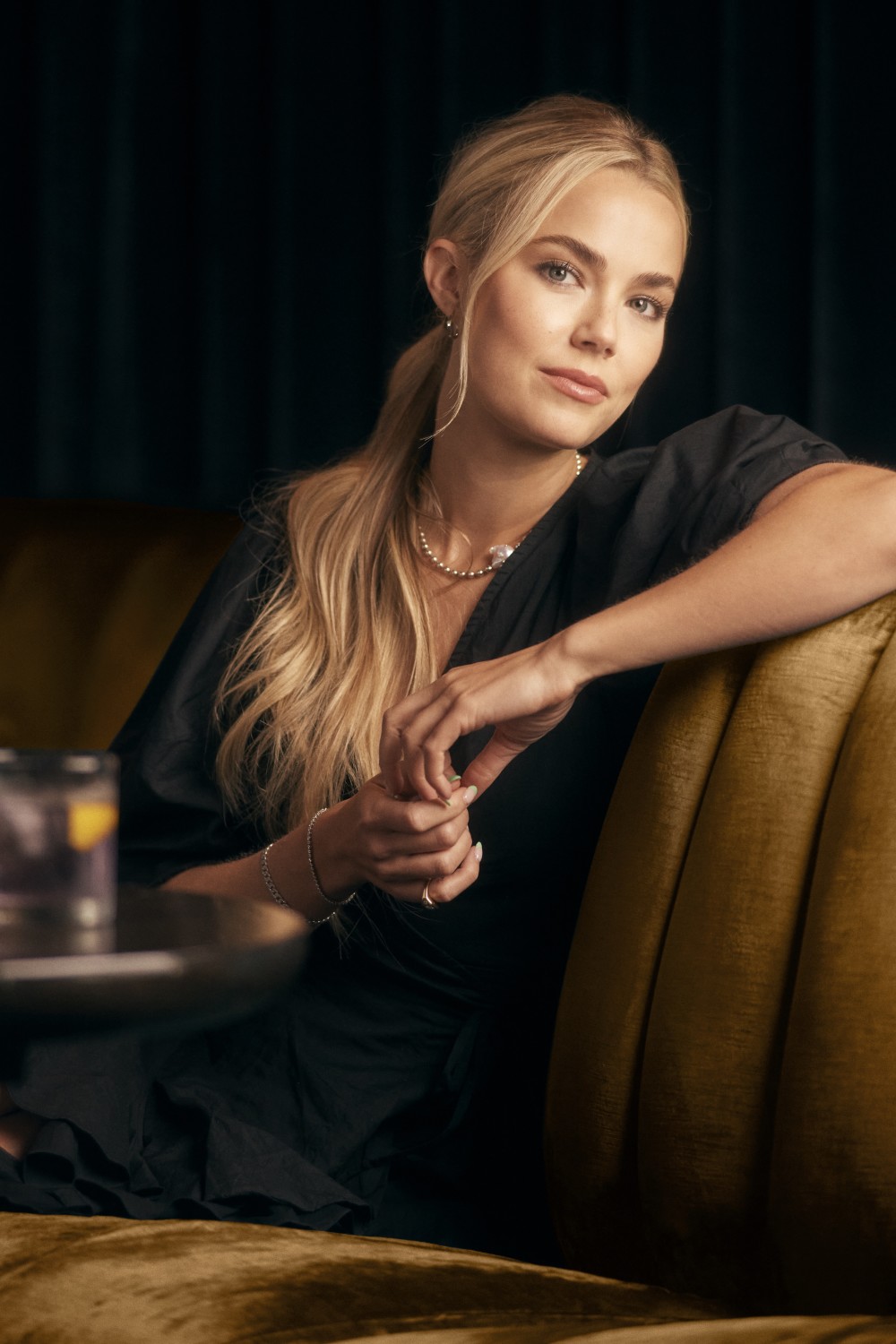 Rebecca Rittenhouse charms in Four Weddings and a Funeral (sharing with us just how much she adored working with Mindy Kaling), captivates as Michelle Phillips in Quentin Tarantino's Once Upon A Time in Hollywood, and this summer, kills it as the romantic lead in Hulu’s new comedy series Maggie, a role made for her. Flawed and relatable but fashionable and cool, Ritttenhouse plays a modern day psychic, and explains that she vied for "more sartorial identity" in Maggie, collaborating closely on hair, makeup, and with costume designer Pam Chilton. Style takes a front seat in the series, in both fashion and decor, and is evident in part, by her fittings with Chilton, which Rittenhouse says resulted in enough fashion to almost-fill a full season two. Like her character, Rebecca likes a look, and loves lending her vision to the visual stylings of the characters she plays just as much as she enjoys styling herself for red carpets large and small, and for everything else in between. Unsurprisingly, our interview began with a conversation about Prada's rad rubber sandals and ended with more #Obsixed list perfection, all of which you can shop here. Premiering on July 6th, the thirteen-episode season follows Maggie and her tight knit group of friends and family as they navigate relationships, Maggie in a particularly unique position dealing with dating---daunting, difficult, and delicious all at once---but also magnified by her intense intuition. Equally unique was the opportunity Rebecca was presented with in being able to speak with a psychic, also a family friend, who assured her that psychic intuition is experienced by practitioners in many different ways. That insight allowed Rittenhouse to feel free in her portrayal. We got down to the details of Maggie's personality, the series' sweet thread of optimism, what the actor imagines for a season two, and more.

What personality traits make Maggie a skilled psychic, and which get in the way? Oh, that's a good question; nobody's asked me that. Maggie is actually a realist in a lot of ways, which is ironic considering how she sees the future, it's fantastical---but she's very grounded as a person. Her realism is what makes her a skilled psychic, when she's reading for other people. When she's trying to interpret her own life, there's fear of getting hurt, and she cuts herself off. She can also tend to make too many assumptions. So that's what gets in the way for her. She thinks she knows everything, so she stops before she starts.

When we first meet Maggie, she's written off relationships because she believes that her psychic abilities make things too complicated. What does she share with others who do not have her gift, but who find themselves swearing off relationships? What is the common thread? She can dole out advice, but she can never take it. She's 100% one of those people. The common thread, and also the lesson that she's trying to learn, is that not everything is as it seems. You have to just live your life and be in the present moment, because you really don't know what's going to happen. Even if you think you know, you don't know.

At the start of the series Maggie makes a chance connection with Ben, and over the course of the series, while Ben is in a relationship with Jessie, we see Maggie and Ben's connection develop. What is it that they love about one another? I think with some people you can't explain what the connection is, but it's just a feeling of knowing. Maggie and Ben have the type of relationship where they finish each other's sentences. They have the same sense of humor. Those are the things that create their connection. And just the fact that Maggie thinks she sees a future with him, I think a lot of us do that in our daily life. I see a future, even if you're not psychic. I see this future with this person and then you believe it. And then you feel like your connection is maybe stronger than it is sometimes.

How is Ben a support to Maggie, in terms of her psychic abilities? Well, Ben always believes her, which is it's something that, he doesn't question. And I think for Maggie, a lot of people in her life, including her mom, have questioned whether or not this is real. And so I think it's a very comforting thing for Maggie to be immediately accepted and believed.

And what causes her to change her mind about dating, even though Ben is off limits? I think part of it is seeing the vision of him marrying Jessie. So the self-awareness that she's not seeing everything all at once is that she's only getting bits and pieces. So what else doesn't she know? And I think Louise really encourages her. And I think Louise is a big part of the reason that she continues to date anyway, because her best friend is encouraging her to put herself out there, just like a lot of us living in the normal, non psychic world, our friends have to encourage us to do scary things. But I do think seeing him marry Jessie after the fact, after she's seen herself having kids with Ben, potentially makes her realize, wait, maybe I don't actually know.

The series centers around a tight group of friends and family. How would you describe their dynamic? It's very quirky. I find it very quirky. I love the dynamic between Maggie and Angel, because it's friendship, but it's also mentor, mentee. And I think that they can challenge each other. I think we see Louise get challenged in the episode where they try to push her into dating and it's, I feel like, what we hope for with her family. It's funny. It can be hard. It can be frustrating. It's supportive. It's quirky. It's very rare. And I also think that, maybe you go through a period in your twenties where you don't feel like your parents are as important to you. But as you get into your thirties, you circle back, and I like that we show that. Everyone is an optimist, it's a very strong thread and important point of view in our series. It's about love and lifting one another up, supporting each other, filling in the gaps when you can't see when you're feeling hopeless. [Maggie's best friend] Louise will come in and pick Maggie right back up, and if Louise isn't feeling confident, Maggie will do the same. The relationship Maggie has with her parents is super important. Its supportive and understanding, but also real. There's an episode when Maggie's fighting with her mom, because she feels she's never accepted her, she has never believed in her gift. That's something that they have to work through, and at the end of the episode she stands up for her daughter. There are aspects of realness, all through an optimistic, hopeful, sweet lens.

Maggie has an important relationship with Angel, who was the guidance counselor at her high school and who made a change in career, by stepping into his gift and purpose as a psychic himself. How does Angel help Maggie to be more of who SHE is? I feel like Angel is always... Well, he's always, I think from the beginning admired Maggie for just being who she was in high school. So it's this circular relationship, where he at first was like, well, you can put yourself out there, but I can't because I have rent to pay and nobody's going to keep me on as a psychic and a guidance counselor. That's ridiculous. So it's almost like by emulating her, he steps into his full power, and then he allows her to step, or he tries to help her step into her fullest power. And he just continues to encourage her to, like Louise does, live in the moment and accept who she is and believe in herself and her abilities and her future.

What do you envision for Maggie's future, for a season two? I feel like it would be fun if something ended up happening where Maggie plays matchmaker, where somehow she gets drawn into it...and then it gets her into trouble!

"I cannot stop wearing my Prada rubber sandals. I wear them everywhere. I also feel like they'll be cute with a sock."

"I am obsessed with this designer based in Mexico City, Varon. They make pieces to order. They're incredible. Totally androgynous, and super cool."

"I recently got a mohair Mantas Ezcaray blanket with all different sized stripes in jewel tones. It brings me absolute joy."

"I'm obsessed with Rejuvenate With Nousha The Reset face oil. It has a lot of CBD in it---I like anything with CBD in it, when I travel, because it calms the skin."

"I just started using K18 Leave-In Molecular Repair Mask on my hair and I love it. It really strengthens."

"I recently got Richard Ginori Oriente Italiano multicolored plates. They're so beautiful. I have them in the Vermiglio color. They are floral, but the colors used make them more modern."

From The Blond at 11 Howard Hotel

To make the cucumber simple syrup, bring the sugar and water to a boil in a medium sauce pan, stirring occasionally until mixture becomes syrupy. Remove from heat and stir in cucumber. Cover and steep for 30 minutes. Place a fine mesh sieve over a bowl, and pour syrup over to strain out solids. Use the back of a spoon to extract as much liquid as possible. Store in an air tight container in the fridge.

Stir together all cocktail ingredients and serve in a rocks glass over ice with a large lemon peel garnish. 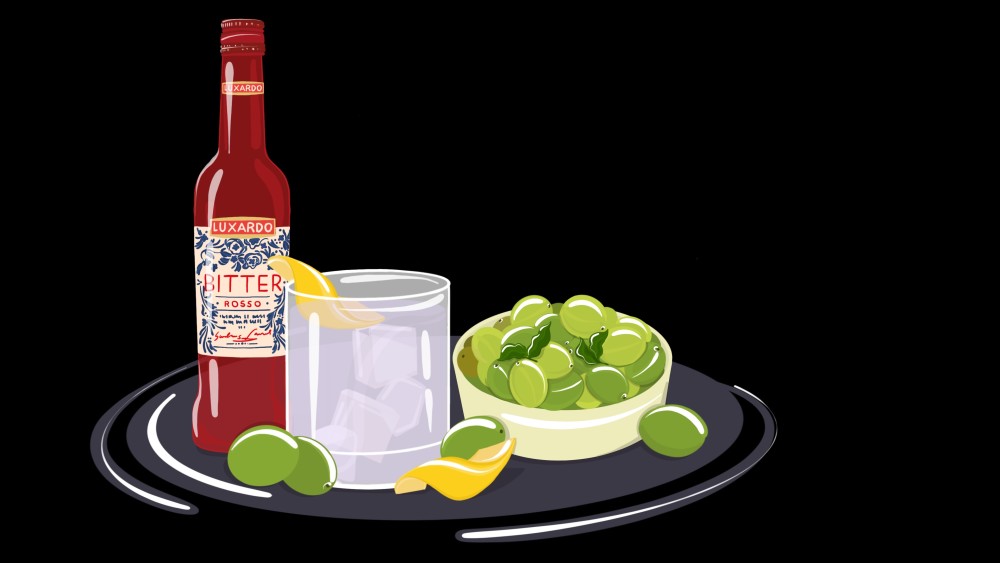