Later, Please
May 2019
The Well Report By Amy

The Death of the Desk Job

Unless you’ve been living under a desk, you’ve probably heard the news that desk jobs are the new silent killer. Some researchers have even deemed sitting “the new smoking.” But beyond the negative physiological side effects of sitting at a desk all day, what about what it’s doing to our souls? From past experience, I can emphatically say that clique-y office politics, tedious tasks, role stagnation, and a micromanaging boss are insidious—but undeniable—forms of torture. When the leftover donuts or birthday cupcakes in an empty conference room are the highlight of your day, it begs the question: what the heck are you doing with your life? Enter Jonathan Kalan and Michael Youngblood, co-founders of Unsettled—a company that organizes 30-day co-working retreats in far-off places. Together, they’ve taken the work-from-anywhere idea and made it a dream-like reality. Offering “workations” around the globe, they are redefining the way we work and live. I talked with Michael about how it all began and what it reveals about the future of work.

How did the Unsettled idea come to life? As founders, Unsettled really came to be out of our careers. We’ve had unusual careers by design, and John has traveled to over 50 countries for his work. I’ve been an entrepreneur my whole life and started a travel company right out of college. We both saw that something was changing in the underpinnings and structure of work—this new economy of work. So about 5 years ago, I put together this sailing trip with about 35 people from 15 countries who work for themselves. I thought we’d just go sailing for a week and chit chat about work, but by the end of the trip it struck us how valuable it was to live and work together for 7 days and we thought: why wouldn’t we just extend this and continue on for another couple of weeks? That was sort of the defining moment. We said, what if we put this on again, but instead of being on a boat, we’re in a big house with 30 people and we live together for a month? Right out of the sailing trip, I just lightly put the word out on social media and I sent a link to some friends with my PayPal and said, ‘hey, shoot me the money if you want to join.’ Two weeks later, there was $50k in my PayPal account.

So Unsettled probably isn’t attracting too many lawyers and doctors. If you’re an entrepreneur or in a creative profession, then yes. But people in more classic careers most likely aren’t flocking to this, right? Well, this is the most fascinating thing about the learning. Everyone aspires to do this, right? Who wouldn’t? About one-third of the people who join us are there to open their laptops and work 40 hours a week. But we get a lot of people—and quite a few doctors and lawyers—who show up and they’re like, wow my life is rushing by. That aspect of having a group of peers outside of their routines by a few thousand miles will allow them to gain that perspective and come home and really be that person they want to be.

I feel like there are so many jobs where society has decided we need to be there 9-5, but do we really? As someone who worked as a creative for a big company for a long time, I always felt imprisoned by the set hours. It does the opposite of foster creativity. The freedom part of it is really a key piece. As creatives, we need to make space to slow down for a moment and be inspired. I think the ones who benefit the most from a program like this are creatives.

A think when people feel like the work-life balance is out of balance, they start to get less productive at work. Why do you think the 9-5 hours with the allotted two weeks of vacation a year has become so unsatisfying for so many? Think about all the changes that have happened in the last 50 years. Look at marriage and how much the age has drifted to be older. And having children has drastically declined. So our identities are so wrapped up in what we do. And now there’s all this talk about finding purpose in your work. It’s almost like work has become this religion and our desks are our alters. There’s no spirituality in a lot of the work that people do and when you get your belief system out of work, I think what happens is that people find that work is void of this deeper meaning. Therefore, routine becomes unbearable because people aren’t finding the deeper meaning there. If people were able to find deeper meaning and true satisfaction in their work, I don’t think we’d be having this conversation. If someone can’t find deeper meaning in their work, they should find meaning in other parts of their life and be willing to understand that their job is a means to that end and not the meaning itself. I think if we fully rely on work to bring us meaning in our lives and that work doesn’t do it, then both the means and the end are dead.

Do you think working remotely is the future of work? I know for sure that more people will work for themselves. People will work outside of how we define office environments today. Upwork recently partnered with a survey outlet and they discovered that in 2027, there are going to be more people working in freelance work than actually working in conventional full-time single employment. In 2027, there’s going to be this tipping point where everything shifts. And I think what will happen with all of these people working remotely is that they’ll be looking even more for a community to work in.

Are there any standout Unsettled “success” stories you can share? Sure. One that pops to mind is of this Irish woman named Leah who was working as a marketing executive in the Middle East. She ended up leaving her job and went on an Unsettled trip to Barcelona and used that time to think through what she wanted next and to apply for jobs. On week three of the four-week retreat, she got three job offers and one was an offer for her dream job. But she didn’t take it because she didn’t feel like her journey was done yet, so she went on a second retreat with us. And then another retreat right after that. So three months of retreats back to back. And after that she got this amazing job that was 10 times better than what she ever thought her dream job was. She felt like she got it because she gave herself space to really follow her intuition when she wasn’t in the productivity hustle.

Can you talk a bit about Unsettled’s most recent partnership with Moleskine?  Well, Moleskine has these great objects out there in the world, right? But they also want to create experiences where these people live these objects—where people live to be that sketcher, writer, or photographer that we represent. They reached out to us because they wanted to take this idea to their creative followers.

What’s so different about the Moleskine/Unsettled retreats versus the other Unsettled retreats? Well, we really dive into the meaning behind what these creatives do. There are workshops that help them design their routines to help creativity. Then we look into the local aspects too—interacting with local art studios and artists. It’s really that surge of workshops and the creative process that we’re focused on with this partnership.

Final question: where do you see Unsettled in 10 years? I think in 10 years work is going to look as different as it did from 1920 to 1945. We’ll always be a community-driven company. We hope that the key places where we already have so many participants—New York, San Francisco, LA, London, Dubai, Cape Town—will have communities with, like, 500 people who are more connected to their sense of meaning. When they come back home, participants will be able to connect with other participants who are living lives that are designed with intent. 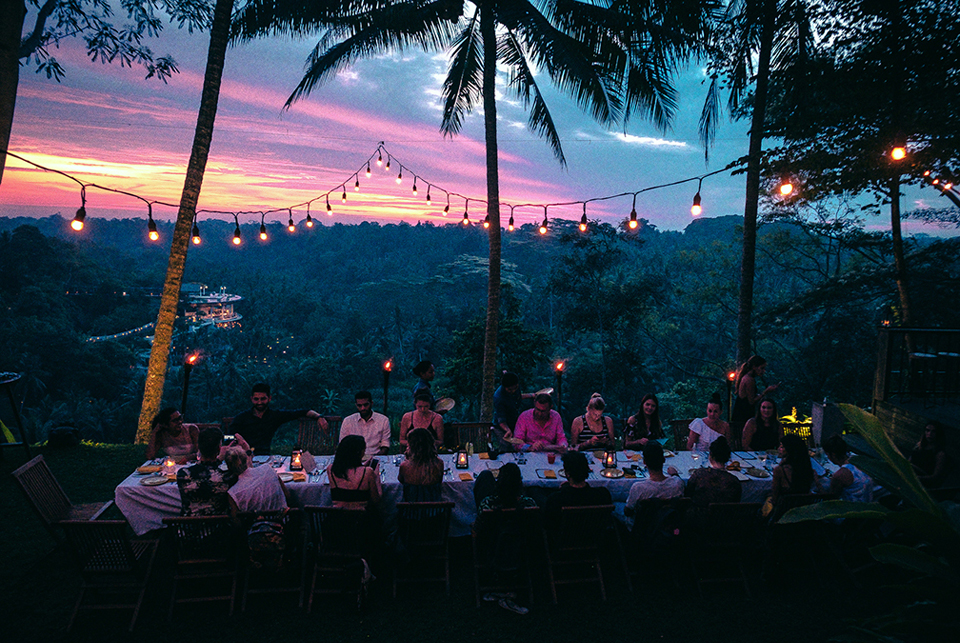