Getting Into Character With Queer as Folk's Jesse James Keitel 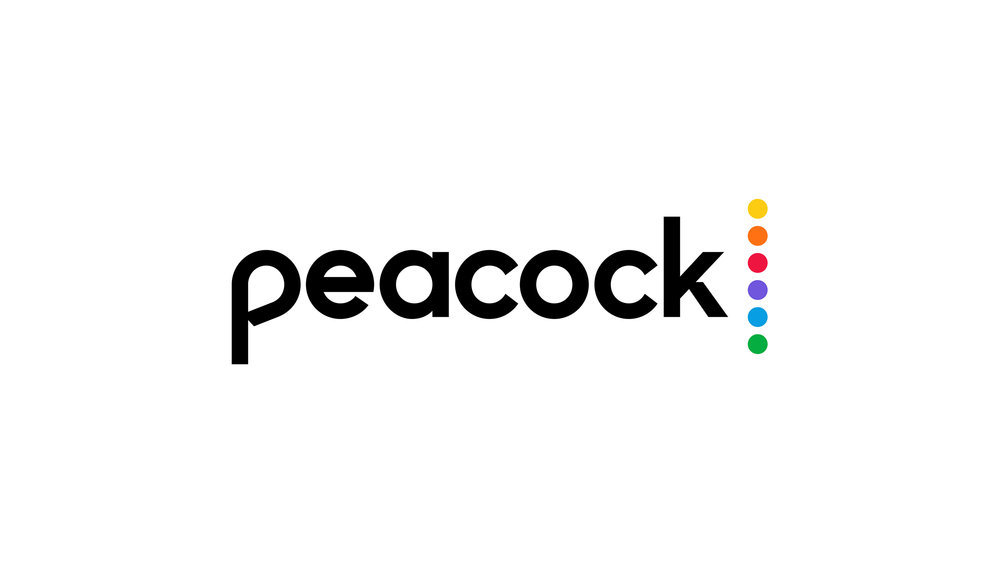 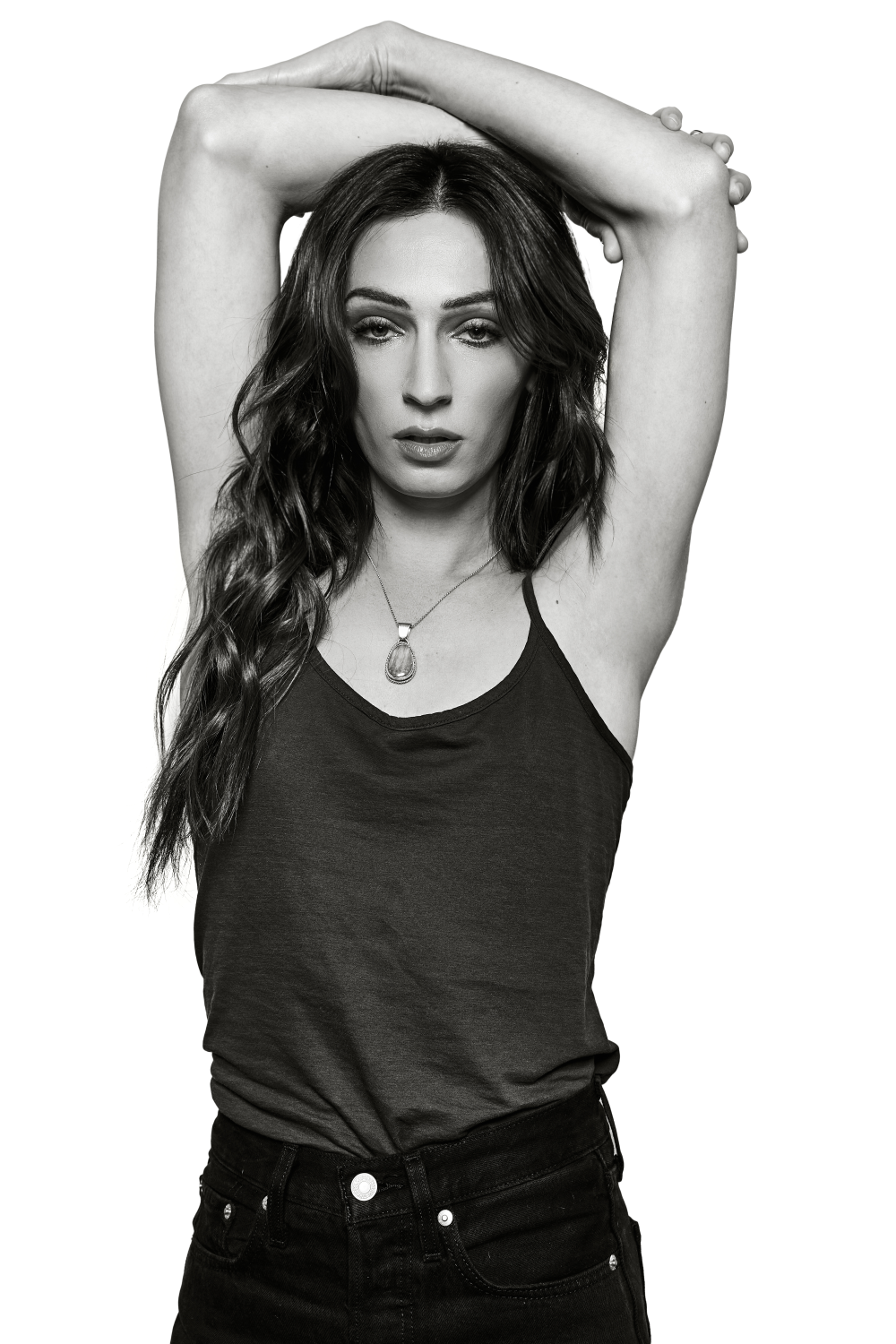 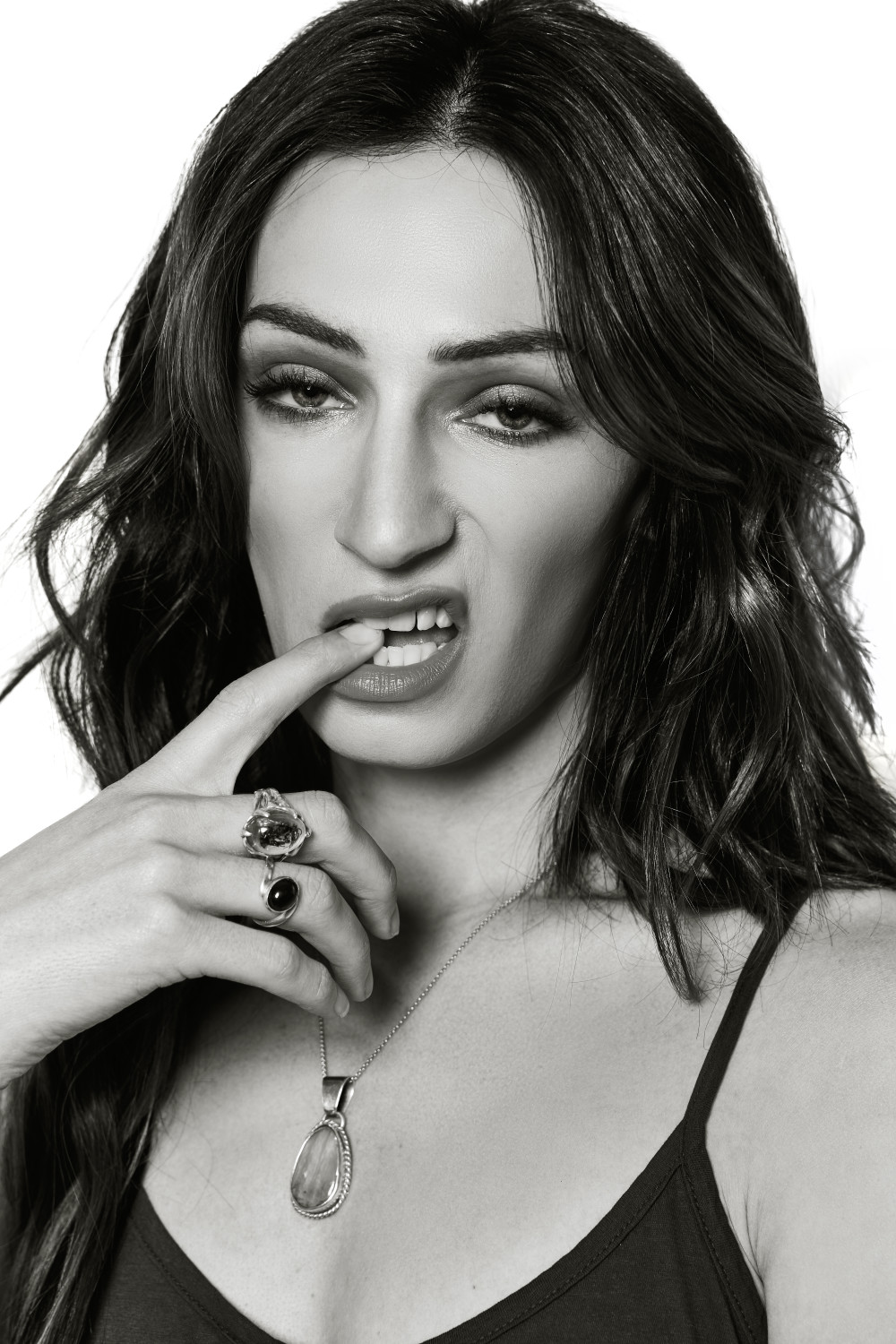 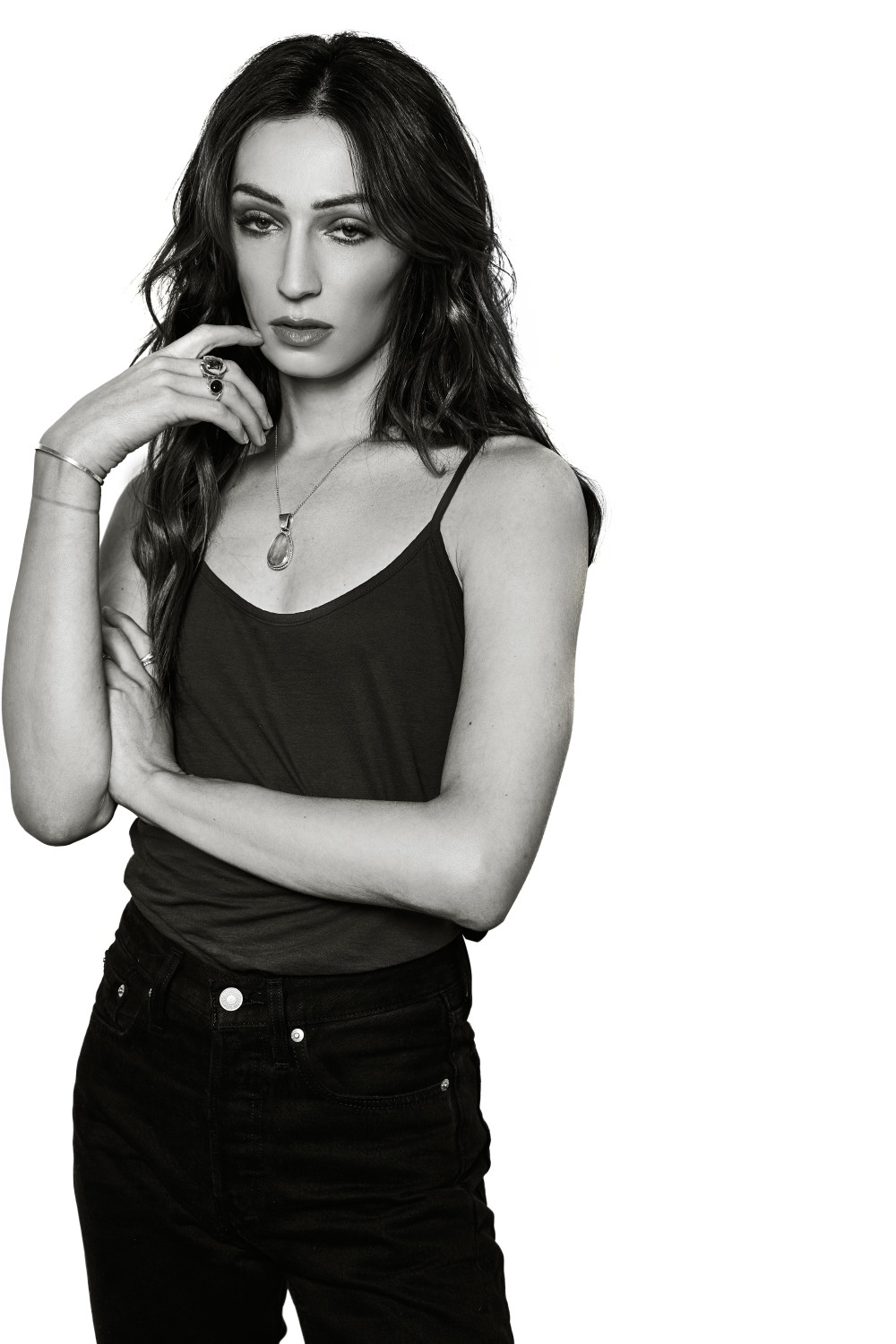 Growing up in a working class town she describes as 'the gateway to the Hamptons,' and after receiving her BFA in Acting, Jesse James Keitel made her mark in roles on series like Ben Stiller-produced, Alex Strangelove, Darren Starr's Younger, and most recently, in Star Trek: Strange New Worlds, as a non-binary space pirate. Her rich portrayal of sex-worker-turned-PI, Jerrie Kennedy, over the course of two seasons of David E. Kelley's hit series, Big Sky, has made her character a fan favorite---and Keitel, one to watch. Making an impression on the industry and on fans alike, the actor, writer, and artist also made history as ABC’s first openly transgender series regular on primetime television. Now, one of Hollywood’s most sought-after actors, Keitel stars as Ruthie, one of the leads on Peacock's highly anticipated reboot of the iconic series Queer as Folk, released this month. With an 'overlap' between Keitel and Ruthie that the actor calls 'absolutely comical,' we caught up with Jesse about what it was like to play someone whose unabashed confidence served to strengthen her as a human and an artist, got lots of behind-the-scenes details on the series she calls 'her absolute dream job,' and talked to Jesse about the LGBTQ+ experience---both on and off screen.

Listen to the full podcast interview on Spotify, Apple Podcasts, and wherever you listen.

Queer as Folk, in this iteration, centers around a hate crime akin to the 2016 Pulse nightclub shooting in Orlando. How was it being a part of this show that has so much light, so much humor, so much music, love, fun, and high energy---but also something dark at its core? Was it fulfilling to be depicting two sides of life and the LGBTQ+ experience, together with an ensemble cast? It felt true to life. I mean, we can't turn on the news without seeing some kind of graphic heinous crime happening to Americans in general. Just the other day, there was a van of Nazis trying to get into a Pride parade. The world is a scary place. It's a scary place for a lot of people, and as a queer person, it's ever present. But still I can laugh, still I can cry. There's so much joy to be had within the moments of sadness, so, on set, the heavier parts of the show were exactly that: they were heavy, but they felt true to life, and I felt like we, as a show, as an ensemble, had a responsibility to tell these stories because they're reflective of the world we live in. Not telling them would be a disservice to the people who've actually lived them.

Your character Ruthie, through most of the season, is depicted as a reluctant but loving mother. What would you say Ruthie is grappling with, in terms of having children and also being tied to the partnership that she shares with Shar? Ruthie makes a discovery about being a parent and some of her long held thoughts on parenthood, but what else is going on for Ruthie? It's a lot of things. It's trading an identity. She's trading a community for this domestic life that she's really not ready for; she didn't want to do it. She wanted to, because she loves Shar, and then her world gets completely turned upside down after the tragedy we see in the first episode. Who are you after an event like that? She gets to really look at her life and say, this isn't the life I want. This might be the life I wanted a couple of weeks ago, but it's not the life I want anymore. And a lot of Ruthie's season arc is trying to get back to the place of, if I want to be with Shar, I need to want to be a parent. I think a lot of that was her own insecurity. She didn't have an aversion to parenthood necessarily, she just had an aversion to fatherhood. She didn't carry the twins, but getting the opportunity to be the mother she's probably always wanted to be, is exciting and scary. It's parenthood. She's also queer and growing up differently than she grew up the first time. Just because you love someone doesn't mean it's forever. There's another character she has a very complicated relationship with. Brodie has a piece of dialogue in episode six, during our flashback scenes, when he says. 'I see you.' That has always run true. Bleep didn't need to explain herself back in episode six, because Brodie got it. Now rewind to episode two with Shar, and you can see that Shar didn't understand what Ruthie was going through. When Ruthie has this big monologue about being trans and feeling disconnected from her body, it took a big monologue for Shar to actually see her. It's two different types of love between these two people, between Ruthie and Shar, and Ruthie and Brodie. Different, and not one that's better than the other. They're both unreliable in different ways, and fulfilling and unfulfilling in different ways. That's the beauty and complexity of relationships.

In a pivotal scene between the two, Brodie calls Ruthie by her dead name, and the series bleeps it out on each occasion the name comes up in dialogue. What was the discussion around the scene and also around the decision to use Bleep? I don't think it was a discussion at all. It was something that was an idea from the start---they would never outwardly reveal Ruthie's dead name. Showing that the way we tell these stories is a choice. We have the choice to be disrespectful, we have the choice to do justice, to do right by these characters and these people. I'm very proud of that choice. I had no part in the deciding factor. I think it's brilliant, and in less capable hands---it could have been a disaster of an episode. It's masterfully done. It's one of the best written episodes of TV, and so well directed by Ingrid Jungermann. I'm so proud of that episode.

How did working on Queer as Folk feed you creatively, and how do you characterize the entire experience you've had so far? It challenged me, it pushed my boundaries, it pushed my own comfort limits in terms of performing. Episode six is a great example. Was I comfortable seeing myself as a 16-year-old boy? Of course not. Did I low-key have a panic attack at first? Yes, of course I did. Did I fight tooth and nail to do this role? Absolutely. I fought so hard to play this role. They originally wanted to cast a younger actor, and I sent in a self tape to do it. I wanted to play Ruthie so badly because it meant a lot to me. Then, the show ultimately challenged me in terms of my own relationship to my body, and my sexuality, and how I express it outwardly....my own comfort level being a queer person in a queer space again. It's been a minute, because of pandemic, and I've been away filming for a couple of years. Also how I occupy spaces is different now than a couple of years ago. I feel like I became an adult while filming Queer as Folk in New Orleans. I feel like I really found my flow during that time.

How much collaboration was involved, and how much were you able to or were expected to bring to the table? What was cool about Queer as Folk, is that I didn't have to bring anything to the table. It was written from the perspective of people who understand my lived experience, because they've lived it too. I didn't need to explain myself. There was no learning curve, and if there was a joke or something where I felt it would fit better in my voice in a different way---they listened, and we adjusted and it made it a better product. The show's writers were writing for us. I will say, I definitely gave input on some of the costuming. Christina, our show's costume designer, is absolutely brilliant, fantastic. Give her all the awards! I would see a few things on Instagram, in an ad or something, and then send it to her, and it would be on set for me within a couple of days. Christina came to the table with all the best ideas, and also played off of what we liked. She looked at me, my body, my clothing, and the colors and shapes that I gravitate towards. There was one shirt from an artist on Instagram whom I adore, @grlofswords, that says, 'A girl without a dick is like an angel without wings,' that we used. Such a good shirt. Some people don't get the joke and are like, that's misogynistic. And I'm like, you're missing the point, babe. It's a T-shirt. I think it's brilliant. Actually, the New York Times came to set the day I was wearing it and photographed me. So I'm like, we love!  And there was this pair of Maison Ernest shoes that came directly from Paris, that I wore on the date night in episode four. They were giving like vertical foot, so hot. They were difficult to walk in, down the crumbling streets of the French Quarter in New Orleans. But so fun. They were so good.

Do you find it hard to step away from a character you've played; was it hard to step away from Ruthie after you finished shooting the season?  I think I'm pretty good at stepping away. Ruthie on Queer as Folk was a little different, because there were things I learned about myself that I don't want to step away from...having to be an adult; a sexual being; to share myself...not just with a room full of cameramen, but with the world. There was an inner self assuredness I always thought I'd had that was really strengthened in my having to embrace Ruthie's confidence.

"I love roller skating. My dog and I would roller skate every day in the park in New Orleans, and it was so nice...such a grounding experience."

"I'm obsessed with Star Trek: Strange New Worlds. It's such a good show; I'm such a fan and I'm shook that I'm on an episode!"

"I have two pairs of Maison Margiela Tabi Boots, white and black. I want them in every color. They're so comfortable. I think they look like little goat hooves."

"I love hair extensions. They give me the opportunity to grow my hair out."

"I recently moved upstate, to the Hudson Valley. I put a hammock in the backyard. It's very comfortable and grounding, and cozy."

"I'm obsessed with squats. I do them while I brush my teeth. She became a gym girl during filming Queer as Folk."